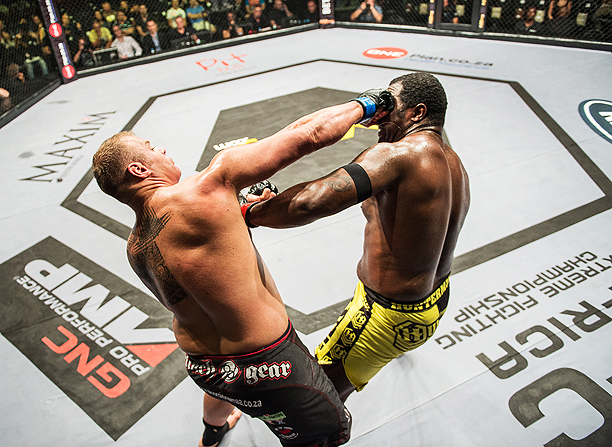 Johannesburg (South Africa) – This time last year Sors ‘Guru’ Grobbelaar was the EFC heavyweight number one contender, and making his preparations to fight then champion Andrew van Zyl for the belt. He had been hailed as the most fearsome strike threat on the continent, a brutal TKO of Bernardo Mikixi his latest handiwork.

12 months later and his fortunes have shifted, but his devastating KO power remains. After losing to the champion he took two extremely close decision losses, slights on his record that burn him.

On August 07 Grobbelaar he clashes with new heavyweight sensation Knife Didier, the DRC born Cape Town resident who smashed a name for himself in less than round at EFC 30, knocking out veteran Ricky Misholas. For Grobbelaar the coming fight is the chance to turn it all around.

“I’m looking for redemption, that’s obvious,” said Grobbelaar in an interview this morning. “I want to get back in the win column, and I’m not interested in leaving the decision to the judges. That doesn’t mean I’m going to be stupid. There are three rounds, five minutes each. The change I’m making is aggression. I’m going to be attacking the fight, not hanging back and picking off punches.”

“I don’t agree with the last two decisions against me,” he continued, “but you can’t fight the judges. But every fight is a win because it’s experience. They’ve made me ready to start something new.”

Grobbelaar is active in the Cape Town MMA circuit and has had his eye on Knife working his way up the amateur ranks for a while.

“His fight against Ricky went exactly according to his style,” said Grobbelaar of his coming opponent. “He comes out aggressive, he overwhelms his opponent with punches, closes the gap, then uses his Judo experience to get the takedown. He tried the hip throw with Ricky, didn’t get it, went back to the hands, and got the KO.”

“Fighting Knife next is perfect,” he continued. “He’s going to come at me. I’m excited about that, because I’m excited about getting back out there and fighting. As I said, for me right now it’s about redemption.”