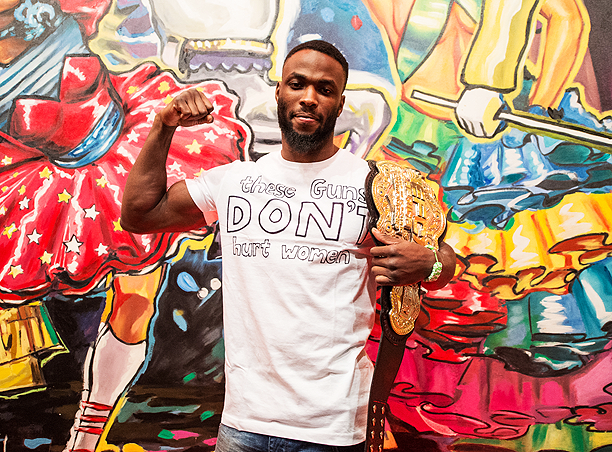 Johannesburg (South Africa) – EFC welterweight champion Henry ‘Herculeez’ Fadipe landed in Johannesburg yesterday evening, ahead of his title clash with Adam Speechly this Thursday night. He immediately took time out to pay tribute to women the world over, in honour of South Africa’s Women’s Month (August) and Women’s Day coming up on August 9.

“South African women have done so much for this country’s freedom,” said Fadipe. “Competing in South Africa is a privilege, and being able to use my platform to bring attention to Women’s Day is an honour. I’m dedicating my fight to South Africa’s Women’s Month, Women’s Day, South Africa’s women, and women all over the world.”

Fadipe was born in Lagos, Nigeria, and relocated to Dublin, Ireland, with his family at the age of ten. The first years overseas were tough. As the only African boys at school he and his brother were bullied, which led to Fadipe to take up boxing as a young age.

“I believe in respect, I believe in dignity, and I love the women that made me into the man I am today,” he continued. “My mom and my aunts shaped who I am; I have an 11 month old daughter, so this is important to me.”

Earlier this year Fadipe spoke out about the kidnapping of over 300 young girls in Chibok, Nigeria, putting his weight behind the #BringBackOurGirls campaign.

This August South Africa pays tribute with Women’s Month, in memory of the thousands of women who marched on the Union Buildings on 9 August 1956, in protest against the extension of Pass Laws to women.