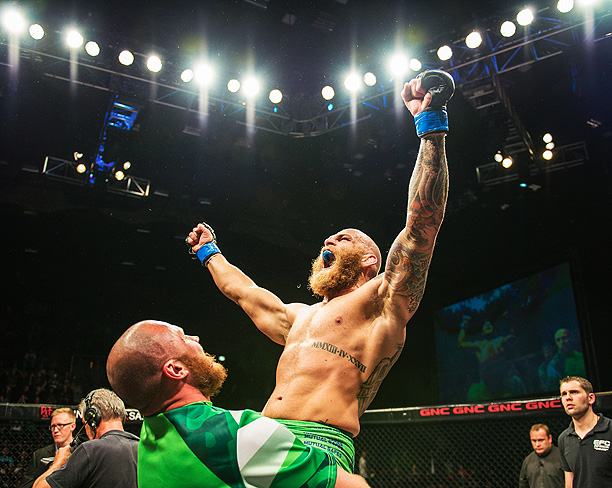 Johannesburg (South Africa) – EFC took place in Durban for the first time with the EFC 33 event, held at the Durban International Convention Centre last night. The night was unofficially billed the ‘African MMA is coming home’ event, and featured the brightest of the city’s home grown MMA stars.

Durban born and raised Garreth ‘Soldierboy’ McLellan headlined the evening’s fight card with his middleweight title defense against Pretoria’s 20 year old sensation Dricus du Plessis. He absorbed a massive onslaught from the challenger in the first round, a full suplex in the second, before bringing his considerable experience into play.

Employing a ground-based plan, the champion wore Du Plessis down with constant wrestling pressure applying submission after submission, before choking the challenger out with a guillotine hold in the third round.

Fellow Durbanite Martin ‘The Punisher’ van Staden made a spectacular return to competition after a 12 month layoff due to a knee injury. He clashed with the universally feared Jeremy Smith, who made his first cut to welterweight, and dominated. Van Staden put in a polished striking display, pressuring Smith constantly with kicks and punch combinations, before scoring a left hook to the jaw that dropped Smith, and had referee Wiekus Swart diving between the two to stop the bout via TKO.

Durban’s Hawkey brothers, Donavin and Wesley, both appeared on the evening’s main card and both emerged victorious.

Donavin, AKA ‘BamBamz’, is the most experienced athlete on the EFC roster with a record 33 fights (21-12), and tonight drew the curtain on his career with a dominant performance against Angola’s Bernardo Mikixi. BamBamz won his bout by TKO in the third round, and afterwards famously said: “This is where it all began, and this is where it ends. Thank you, Durban.”

The evening’s final main card bout was contested between Durban’s Armand de Bruyn and former welterweight champion Michiel Opperman. This time the Sunshine City did not succeed, with De Bruyn falling to a guillotine.

Performance bonuses were handed out to Baldwin Mdlalose and Craig Ninow for their bantamweight bout on the night’s prelim card, and Wesley Hawkey. Tyson Chelin and Matthew Buirski were given the fight of the night award. Cape Town’s Luke Michael, making his debut, took the submission of the night award with a sensational triangle choke on Texier Kabesa. Martin van Staden was given knock out of the night honours for his finishing of Jeremy Smith with a left hook.

The EFC 33 full results are: