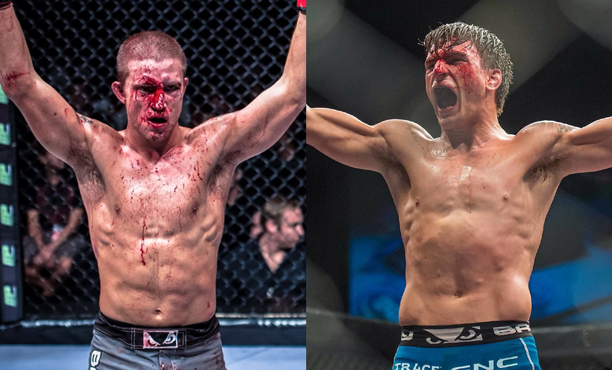 Their first bout, at EFC 13, propelled both into the global limelight. Madge for his phenomenal talent as a striker, and Mynhardt for his brutal toughness. It is still remembered as one of the most legendary fights in EFC history, much of it for its controversial ending.

Mynhardt took the win, and Madge’s fans have never forgotten the injustice.

Their second bout took place at the same venue, Cape Town’s GrandWest Grand Arena, this time with Madge wearing the champion’s belt around his waist. After his ground demolition of Costa Ioannou, all expected him to dominate Mynhardt – then known as a notoriously flawed grappler. Mynhardt entered the bout a different animal, resisting every submission attempt.

The fight went the distance and was closer than close. The announcement of a split decision victory to Mynhardt went rocketing around the world. He left Cape Town with the belt. Once again Madge and his fans were left on the wrong side of a decision that on any other night, could have gone the other way.

Mynhardt is the man that Madge has been unable to beat. He is his nemesis. For their third encounter they face each other in Johannesburg, the first time they fight in Mynhardt’s home town. Perhaps on that night the planets will finally align to give Madge the crucial edge, in a rivalry that has already gone down in the history books.

EFC 34, presented by BetXchange.com, returns to the Carnival City Big Top Arena, Johannesburg, on Thursday 02 October 2014. Tickets on sale soon at www.computicket.com. Book your cinema ticket to all fights live and in state of the art digital projection at www.sterkinekor.com. Watch the entire event live, from anywhere on the globe, via online streaming at efcworldwide.com/efc_africa_404.php.