“If We Started On Our Knees, I’d Still Beat Him” 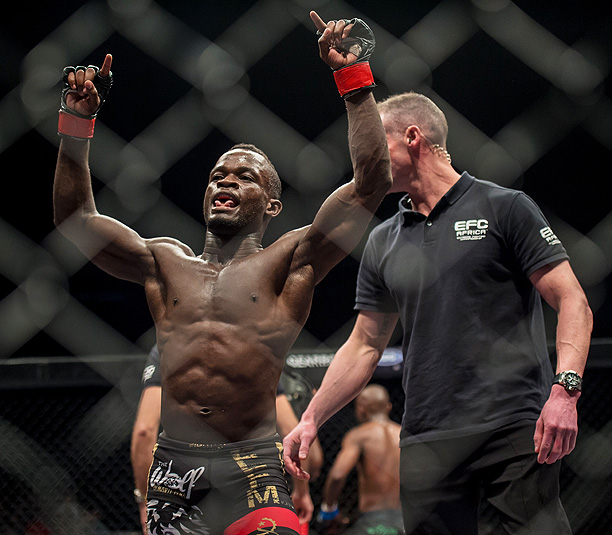 Johannesburg (South Africa) – Earlier this week bantamweight challenger Francois ‘Franaconda’ Groenewald made some controversial remarks about champion Demarte ‘The Wolf’ Pena, ahead of their title showdown on October 02.

Groenewald said that the champion has a habit of buckling under pressure, that his well-known game plan of wrestling top control to take a points victory is exactly what Groenewald (a submissions specialist) wants, and that Pena is unprepared for Groenewald’s unorthodox style.

On hearing them Pena responded off the cuff.

“He’s not good enough to beat me,” he said. “We could start the fight on our knees (referring to Groenewald’s submissions pedigree) and I’d still beat him.”

“Look what happened, I won. He’s basing his whole camp on a fight that I won,” he added, remembering his bout against Wentzel Nel where he was knocked down four times, but still took the victory.

Pena is the EFC organisation’s most successful athlete. He is the first to have held a belt in two weight divisions (feather and bantamweight), was the youngest champion to date, holds the record for the longest unbeaten run (9-0), and for the most successful title defenses (5).

Groenewald, however, brings a submissions knowledge that none of Pena’s previous opponents have had. A bronze medalist at the Abu Dhabi World Brazilian Jiu Jitsu Championships (2012), Groenewald is primed to take the fight to Pena.

“Demarte has held a champion’s belt for Angola for too long now,” he said. “It’s coming back to South Africa.”

EFC 34: Mynhardt vs Madge, Pena vs. Groenewald is presented by BetXchange.com, and takes place at the Carnival City Big Top Arena, Johannesburg, on Thursday 02 October August 2014. Tickets on sale soon at www.computicket.com. Book your cinema ticket to all fights live and in state of the art digital projection at www.sterkinekor.com. Watch the entire event live, from anywhere on the globe, via online streaming at efcworldwide.com/efc_africa_404.php.