“Are You Not Entertained?” 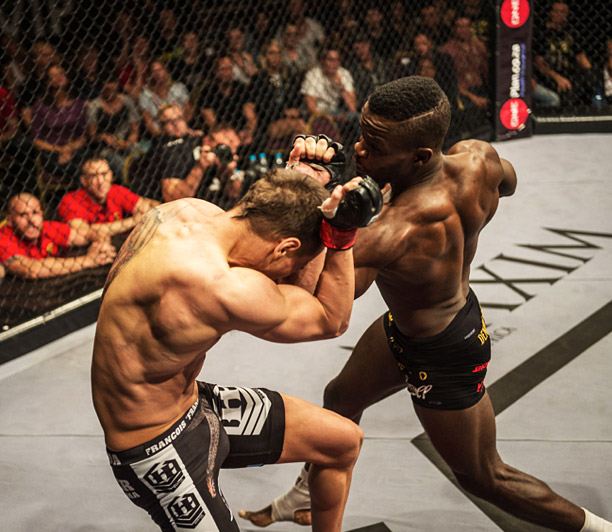 Johannesburg (South Africa) – EFC returned to the Big Top Arena at Carnival City, Johannesburg last night. On a night that only one of twelve fights went to the judges, the packed crowd was treated to a showcase of world class MMA action. Two colossal title fights, both of which managed to live up to the pre-fight anticipation inside the arena, rounded off a great night for the fans.

Pretoria native Leon ‘Iron Lion’ Mynhardt headlined the evening’s fight card with his lightweight title defence against Cape Town’s Sibusiso ‘The Monster’ Mdoko. Mynhardt showed exactly why he is one of the most destructive athletes in the organisation with a non-stop onslaught on his opponent, maintaining a consistently fast paced striking strategy in the opening rounds.

Mdoko initially tried to stand and trade with the champ, but had to rethink his game plan when he found himself on the receiving end of some vicious combinations. The statuFeiteiras quo remained when the fight went to ground, and Mynhardt deservedly retained his belt when he sunk a rear naked choke for the victory.

Demarte Pena stepped up to defend his bantamweight title for the first time, facing who many believed to be his toughest challenge yet in submission master Francois Groenewald. Groenewald, on a four-fight tear in the bantamweight division, had promised to defeat who he regarded a “boring” champion in Pena. The pre-fight talk from the challenger clearly had an effect on Pena, who brought a far more aggressive and enterprising game to the Hexagon. Pena’s game plan did make him vulnerable to submissions on the ground, but the strength and resilience of the Angolan ensured he foiled any of Groenewald’s attempts. Pena eventually managed to finish the challenger after he landed a right cross in the fourth round, forcing the referee to stop the fight and award the TKO victory. In his post-fight interview, Pena suggested repeatedly to the fact that he can be exciting, ending his interview with the famous Gladiator reference, “Are you not entertained?”

Andrew van Zyl put himself into contention for a heavyweight title fight after a laboured victory over Vandam Mbuyi. Mbuyi started off eagerly, landing big striking combinations. The former champion showcased his iron jaw by weathering the storm to work out his rhythm and start dodging strikes. Van Zyl then did what comes naturally to him, successfully taking Mbuyi down and landing punches after gaining Mbuyi’s back. Mbuyi promptly tapped before he took any harmful damage.

Champion Dalcha stepped in on a days’ notice to face the dangerous striker Pete Motaung. Using his impeccable Judo, Dalcha made massive throws, ending in a tight armbar to win in the first round.

In the first fight on the main card, Tumisang Madiba avenged his amateur loss to Pierre Botha with a slick guillotine choke early in the first round. He then went on to challenge the entire upper echelon of the division, eventually calling out the undefeated Tyson Chelin at the post event press conference.

Performance bonuses were handed out to Feiteira for his hearty stand-up exchange, and Tumisang Madiba for his showmanship. Champion Dalcha for his clinical Judo display despite taking a fight on short notice, and the record-breaking champion Pena. Submission of the night went to Tumisang Madiba. Knockout of the night went to Hanru Botha for his walk-off K.O. of Feiteira. Fight of the Night award went to bantamweights Oumpie Sebeko and Lourens Botes for their closely contested bout.

The EFC 34 full results are: