The lighter side of Groenewald 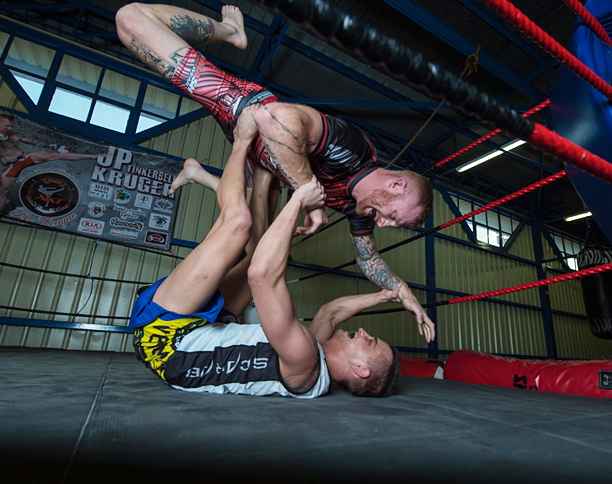 Johannesburg (South Africa) – Many MMA athletes cross train in a variety of styles and other sports to help improve their performances during competition. This is shown more so than ever as the bantamweight title contender, Francois Groenewald takes cross training to another level, and includes ballet dancing as part of his fitness repertoire.

In a world of alpha male athletes, being a dancer is not seen as very impressive or beneficial, but Groenewald who has won six out of his last seven bouts and has claimed solid finishes to earn him eight career victories, finds strength where the majority don’t.

“I started ballet before my first EFC fight against Abdul Hassan. One of my friends asked me to do her a favour and do some lifts.” Groenewald stated. “After that first session I was dead tired from all the lifting and I realised how incredibly good ballet is for my conditioning,” he continued.

When asked if and how the ballet helps him with fighting he responded, “the dancing helps me with my fighting, it makes me a lot stronger, and I gain a lot of flexibility with some of the moves I have to do along with strong stamina. We often repeat a dance sequence 20 or 30 times in a single session.”

“The ballet adds the ability to compete under pressure, especially when we do a show. I have to deal with the pressure of not dropping people or making mistakes, so that is awesome for my MMA,” he stated about the psychological benefits. “It is also a way for me to relax, de-stress and be in a different frame of mind to fighting everyday.”

Look out for Francois Groenewald at EFC 34 as he takes on the undefeated champion Demarte Pena.

EFC 34: Mynhardt vs Mdoko, Pena vs Groenewald is presented by BetXchange.com, and takes place on Thursday 2 October 2014 at Carnival City, Johannesburg. Tickets on sale at www.computicket.com. Book your cinema ticket to all fights live and in HD at www.sterkinekor.com. Watch the entire event live, from anywhere on the globe, via online streaming at efcworldwide.com/efc_africa_404.php.