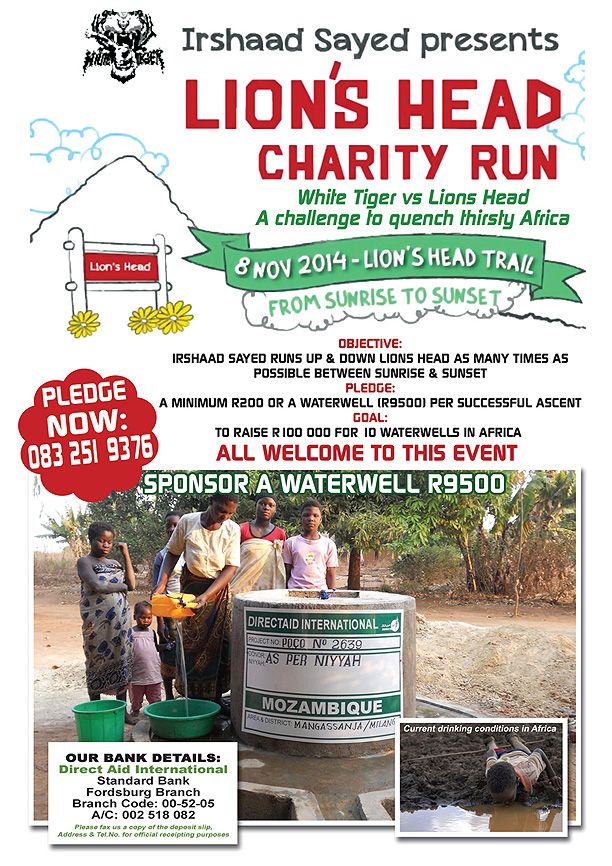 Johannesburg (South Africa) – Many know Cape Town’s Irshaad ‘White Tiger’ Sayed as a phenomenal Muay Thai and MMA athlete. A lesser known fact about him is his philanthropic nature.

On Sunday 8 November, just two days after his EFC main card bout against Abdul Hassan, he will run up Lion’s Head as many times as possible from sun up to sun down.

Sayed is really confident ahead of his bout with Hassan, ”Fight prep is going well, I feel mentally, physically and spiritually ready for anything placed in front of me”, he stated this morning.

“MMA is just as much a mental fight as it is a physical fight. Abdul knows he can’t win the physical fight, so he’s trying to get in my head by running his mouth,” Sayed responded to Hassan’s comments yesterday. “I don’t let his childish behaviour get to me, I remain focussed on what I need to do,” he concluded.

“Things like water and electricity is something we take for granted every day, while there are millions of people out there without access to either,” he said about the charity run. “And if we can help a little village with a fresh water supply, with a little bit of effort then why shouldn’t we,” he concluded.

All money donated, will go to Direct Aid International who will build water wells for an African community. If you are in Cape Town, go give him your support and help Sayed complete this challenge.