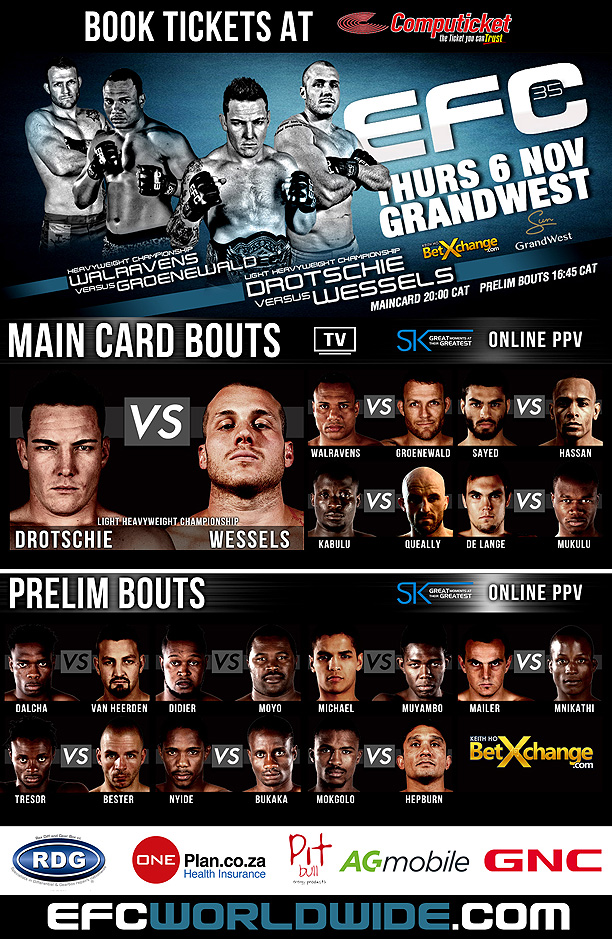 Johannesburg (South Africa) – There are exactly two weeks to go until EFC 35 in Cape Town. Headlined by the light heavyweight title fight between Gideon ‘Juggernaught’ Drotschie and Norman ‘Chef’ Wessels. You can expect fireworks when these two step inside the Hexagon for their highly anticipated grudge match.

Co-headlining the event will see the heavyweight clash between one of the baddest men on the planet Christophe Walravens, fresh off his six month suspension, when he faces off the ever playful Brendon Groenewald for the EFC heavyweight title.

Muaythai world champion Irshaad squares off against ground specialist Abdul Hassan in a heated bantamweight bout. While Francois Kabulu returns to the Heaxgon to continue his five fight winning streak after a year layoff. He will face Irishman Peter ‘Showstopper’ Queally in his EFC debut. The final spot on the main card is filled by Cape Town crowd favourites Shaun de Lange & Bruno ‘The Major’ Mukulu.

The card is rounded off with seven action packed undercard bouts with some of the best MMA talents from around the region.