Chef Cooks Up A Storm 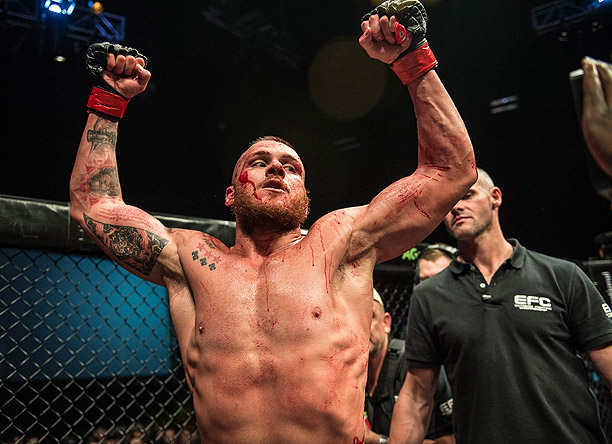 Cape Town (South Africa) – EFC 35 raised the roof at GrandWest in Cape Town last night. The near capacity crowd was on the edge of their seats for seven hours of action. The two main event fights both lived up to the hype, leaving the crowd in raptures by the end of the evening.

Hometown hero Gideon ‘Juggernaut’ Drotschie headlined the evening’s fight card in his title defence against Johannesburg’s Norman ‘Chef’ Wessels. Unfortunately for the partisan crowd, the challenger put on a clinical display from the onset. An onslaught of takedowns and smothering of the champion saw Wessels control the fight on the ground with some world class grinding. Drotschie was cut early on in the fight, and the wounds worsened throughout to a point where the doctor had to stop the fight in the fourth, resulting in a TKO victory for Wessels.

Brendon Groenewald and the enigmatic Christophe Walravens did battle for the vacant heavyweight title in the evening’s co-main event. Groenewald, seen by many as the underdog coming into the fight, put on a performance that answered any questions that may have been asked of his striking ability. What started as a trading battle between two grappling specialists, soon evolved into a clinch battle. Upon disengage of the clinch, Groenewald landed a barrage of punches which disoriented Walravens. With the DRC native unable to defend himself, the referee stepped in and called the fight halfway through the first round.

Irshaad Sayed catapulted himself into contention for a bantamweight title shot, after an energetic unanimous victory over Abdul Hassan. Sayed started with a clinical Muay Thai display, out-striking his resilient opponent. The former featherweight contender showcased his iron-will by weathering the storm and attempting takedowns. In the third round, momentum began to shift as Hassan began to figure out Sayed’s rhythm and started landing the take-downs. However, Sayed displayed his new ground skills and successfully defended on the ground until the buzzer went for the final bell.

Irishman and EFC debutant Peter Queally displayed all of his experience by grinding out a victory over Francois Kabulu. What started off with Kabulu’s attempted typical lay and pray tactic, ended being stifled by excellent takedown defence. Queally then managed to control the rest of the bout with his superior wrestling nearly managing to submit Kabulu. Queally ended up taking the fight by unanimous decision.

In the first fight on the main card, Bruno Mukulu won a contentious victory over Shaun de Lange. In what was a split decision victory, Mukulu was deemed to outscore de Lange with unconventional striking and takedowns.

Fight of the Night honours went to Irshaad Sayed and Abdul Hassan for their three round war. Knockout of the night went to Brendon Groenewald for his K.O. of Walravens. Performance bonuses were handed out to Shaun de Lange and Peter Nyide for their exceptional performances.

The full EFC 35 results are: