Tension mounts at weigh-in at GrandWest 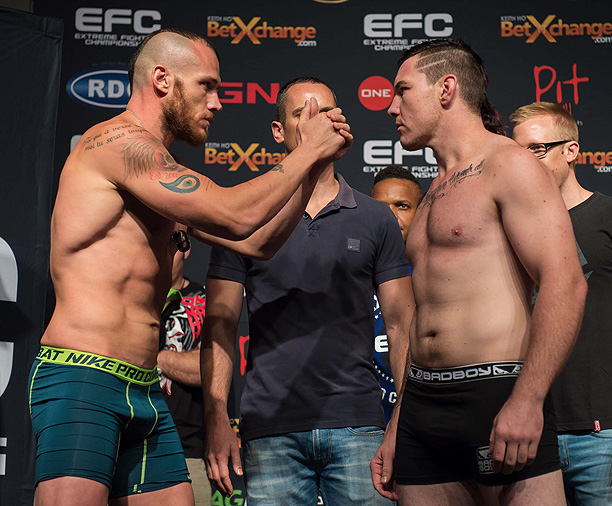 Cape Town (South Africa) – The official weigh in for EFC 35 played out to a boisterous crowd at GrandWest this afternoon. The electric room was filled with Cape Town’s loyal MMA fans anticipating the biggest fight night of the year.

The event is headlined by the EFC light heavyweight title fight between the undefeated champion Gideon ‘Juggernaut’ Drotschie and the intense challenger, Norman ‘Chef’ Wessels. During the face-off, EFC president Cairo Howarth had to break up what was a heated stare down between the two athletes. This is a bout that has clearly become personal, and fans can expect an all out war when they step into the Hexagon on Thursday.

“I am just glad that Gideon doesn’t smell of alcohol from the bar,” Wessels taunted the champion in his interview. Drotschie did not mince his words, urging the people of Cape Town to get to GrandWest and support their hometown hero.

Co-headlining the event is the anticipated heavyweight title fight between the enigmatic Christophe ‘Bomaye’ Walravens and Cape Town native, Brendon Groenewald. This bout will see the explosive Walravens test himself against the highly technical BJJ specialist. The heavyweight division has been absent of a champion since EFC 27, and both are eager to claim the organisation’s most prestigious title.

Also featured on the main card, Muay Thai world champion Irshaad ‘White Tiger’ Sayed faced off against Durban’s Abdul ‘Hollywood’ Hassan at bantamweight. Hassan brought his pre-fight antics onto the stage, and pushed his face right into his Sayed’s, fishing for a reaction.

Irishman Peter Queally, making his EFC debut, squared off against DRC’s Francois ‘Frenchman’ Kabulu, who is returning to the Hexagon after a one-year absence. The DRC native could be seen whispering aggressively at his opponent as they faced off. Queally seemed unaffected, but eager to get in the Hexagon.

Three fighters initially failed to make weight. Sizwe Mnikathi and Sydney Mokgolo, who were 3.2kgs and 1.8kg over respectively, were subjected to a financial penalty. Chad Hepburn arrived late for weigh-ins, but proceeded to make weight.

EFC 35 weigh-in results were as follows: