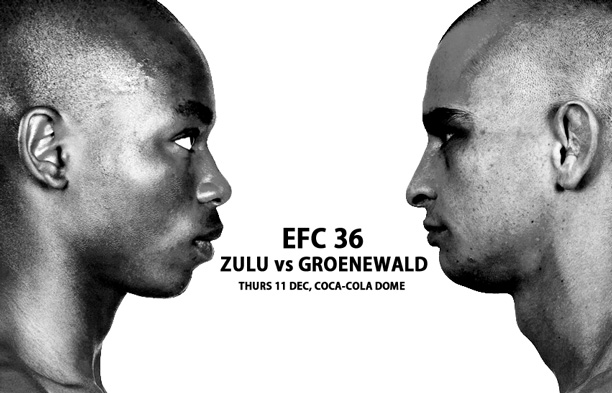 Cape Town (South Africa) – In October, the opening of the flyweight division was announced with much anticipation. December 11 will see a former bantamweight champion and number one contender square off in the first EFC flyweight bout in history.

Nkazimulu ‘Zuluboy’ Zulu was the first EFC bantamweight champion until he lost the title to the current champion Demarte Pena. Zulu has always been seen as small for the bantamweight class and jumped at the announcement of the new lighter category.

Zulu has shown his exceptional Muay Thai talents with accurate striking and remarkable resilience in his previous bouts. Even though he has numerous submission victories, this will be the first time he has faced a submission specialist.

Francois Groenewald was on a three fight winning streak in the lead up to his title fight with Demarte Pena at EFC 34. That is when it all fell apart and he lost via TKO in the fourth round.

Both athletes are looking for retribution for their title losses against Pena. Who will take the first win in the flyweight division in December?