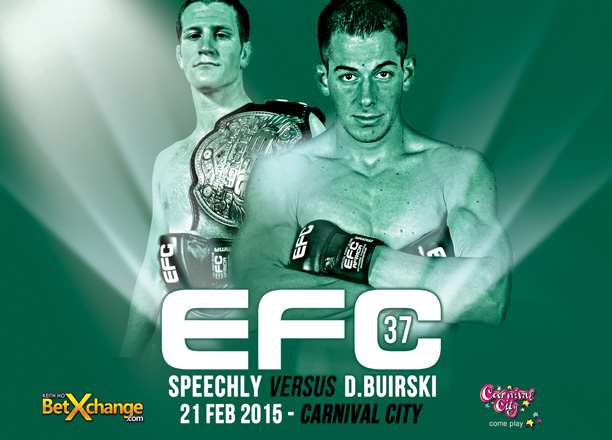 Speechly is seen as a master strategist. Best displayed in his most recent bout where he neutralized former champion Henry Fadipe to reclaim gold. The physiotherapists grappling skills and understanding of body movement have helped him to control fights and take them where he is most comfortable. This will be the second defence of his title, but has he learned from his mistakes when he lost it the first time?

Standing in his way of making history is the tenacious David Buirski. The eldest brother of three professional plumbers is best known for his spectacular KO power, Buirski has been tearing through the welterweight division. A 3 fight win streak, all by first round stoppage, earned Buirski the challenger’s right.

Since his loss, to former contender Tyron Rightford, Buirski has gone back to the drawing board and neatened up his striking and grappling. With the obvious improvements he knows that he is now ready to become the champion. Having never faced a grappler of such a high pedigree, this will be Buirski’s biggest strategic challenge yet.

In the buildup to EFC 36, Speechly suffered a rib injury and their title bout had to be postponed. The number one contender opted to wait for the champion, and for his deserved title shot. Speechly has since recovered and has time until February 21 to fully prepare for the Buirski onslaught.

Will Speechly be the prodigal son to break the welterweight curse, or will it continue?