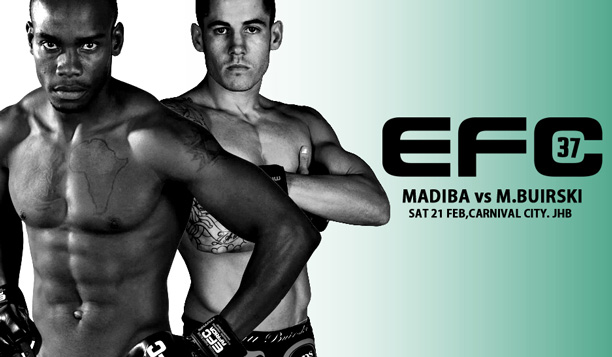 Johannesburg (South Africa) – Tumisang “The President” Madiba is an athlete with massive hype surrounding him. He has been on a three fight win streak since signing with EFC and has earned performance bonuses from all his bouts. Now he faces the next step in competition. At EFC 37 he faces Matt Buirski in what could be a career defining bout for both athletes.

This will not be the first time these two meet in combat. They fought to a points decision, where Buirski claimed the victory in what has been described a razor thin advantage. They were unaware at the time, it was already decided that the winner of that bout would be awarded an EFC contract. But will history repeat itself?

Madiba has never been pushed to the fully tested inside the Hexagon and Matt Buirski is just the man to do it. Come 21 February we will see if all the hype surround Madiba is justified when he takes on this massive task.

Buirski might be on a two fight losing streak, but both those fights have been on the highest end of the spectrum of entertainment. Now is his chance to redeem himself and get back into the wining column to take after his brother David that is co-headlining the event.

Both athletes are known for putting on brilliant performances and wowing the crowd with their technical skills and tenacious attitudes. Both have collected performance bonuses and fight of the night honours. This one is not to be missed.