A journey back to the title, 21 February 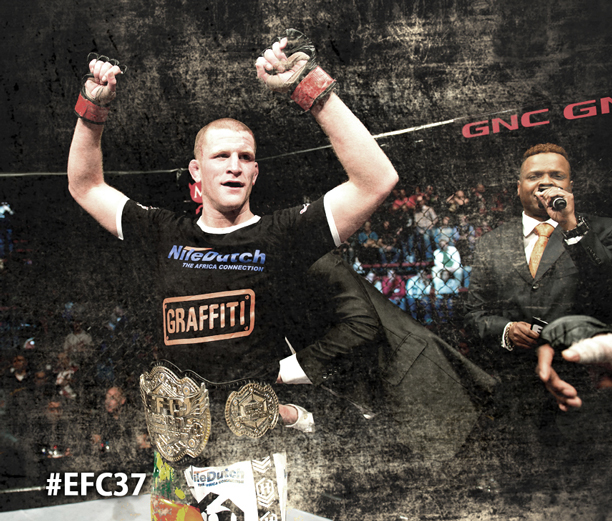 Johannesburg (South Africa) – Three years ago Adam ‘The Prodigy’ Speechly lost the welterweight title to Dallas Jakobi and thus the start of the notorious welterweight curse.

At EFC 32 he came full circle when he defeated Henry ‘Herculeez’ Fadipe to reclaim the belt and prolong the curse. He was then scheduled to defend the title against David Buirski at EFC 36 but was forced to withdraw due to an injury. Finally on 21 February fans will witness him in action as he attempts to break the dreaded curse.

“It was a very frustrating injury,” stated Speechly in an interview this morning. “I could feel it with everything I did and the only way it could heal is with proper rest. Idle hands are the devils playground as they say, and it gave me a lot to contend with in my mind,” he exclaimed.

“The rest was good for me and something I definitely needed,” he continued about his recovery. “The body has funny way of telling you that you need the break. Now after the rest, I am in a mentally good space and physically back at one hundred percent,” he concluded.

“It is something interesting; I have played a part and was the first one to lose the title three years ago.” Speechly commented on the welterweight curse. “It has been 3 long and hard years to get it back. It was worth it though; losing the title taught me that I wasn’t ready for it. I have matured and understand now that everyone coming for it is having the biggest fight of their life. Now I have come full circle and have the title back. It is important to respect that person opposite you in the Hexagon is a skilled athlete and be ready for that and acknowledge it,” he concluded.

“If you look at David Buirski he is a very well rounded fighter.” Speechly commented on his upcoming opponent. “I don’t think I have changed anything up for this bout. My focus for the last three years, my goal, has always been to improve and never be stagnant. If you stop growing, others will outwork you, and you will be caught out. Acknowledging my weaknesses and improving on them is my general strategy. Each time I get in the Hexagon, I want to be better than I was the time prior and continually grow,” he continued.

“Thanks to everyone that has stuck by me and help me through these last hard few years.” Speechly thanked his team. “I am going to reward all you guys for all loyalty over the years.”