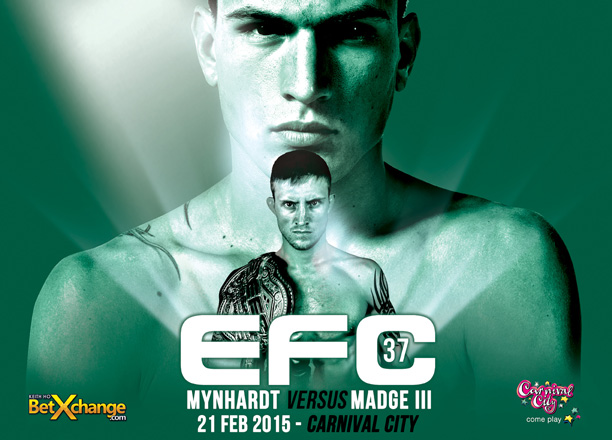 Johannesburg (South Africa) – EFC is back and ready start 2015 off with the most anticipated fight card in recent years. On 21 February, live from Carnival City in Johannesburg, fans will witness the final chapter in the trilogy of the lightweight wars between champion Leon ‘Iron Lion’ Mynhardt and Don ‘Magic Man’ Madge. Co-headlining the event will see the welterweight belt on the line as Adam ‘The Prodigy’ Speechly attempts to break the welterweight curse when he defends his title against the tenacious David Buirski.

The last time Mynhardt and Madge faced each other in Cape Town, Madge was the defending champion and lost the belt in a controversial split judge’s decision. They have been scheduled to face each other twice since that historic night and have both had to withdraw due to various circumstances. On 21 February, EFC fans will finally get their wish when they battle in a role reversal and compete for the lightweight strap.

Originally scheduled for December, Speechly was forced to withdraw due to injury. The challenger, Buirski, was incredibly hungry for his shot at the title and opted be patient and wait for a fully recovered Speechly. Will we start the year with a new champion, or will the dreaded curse finally be broken?

Plus Darren ‘Double D’ Daniel and JP ‘Tinkerbell’ Kruger return to the Hexagon to face off and begin their run towards claiming the now vacant middleweight belt. Not to forget, two of the most exhilarating featherweights, Matt Buirski and Tumisang ‘The President’ Madiba square off. Topping off the main card Themba ‘The Answer’ Gorimbo will look to continue his four fight win streak when he meets EFC veteran ‘Alex The Professor’ Cheboub. But first watch 7 action packed prelim bouts including the highly anticipated heavyweight clash between the Congolese Ricky Misholas and Cyril Asker representing France.

“This fight card is erupting!” said EFC president Cairo Howarth. “The first event of the year is lining up to be a massive night of action with many more big fights to be announced in the coming weeks.”

EFC 37: Mynhardt vs. Madge III, Speechly vs. Buirski is presented by BetXchange.com, and takes place at Carnival City, Johannesburg, on Saturday 21 February 2015. Tickets on sale soon atwww.computicket.com. Book your cinema ticket to all fights live and in state of the art digital projection atwww.sterkinekor.com. Watch the entire event live, from anywhere on the globe, via online streaming at efcworldwide.tv