Buirski looking to finish at every opportunity, 21 February 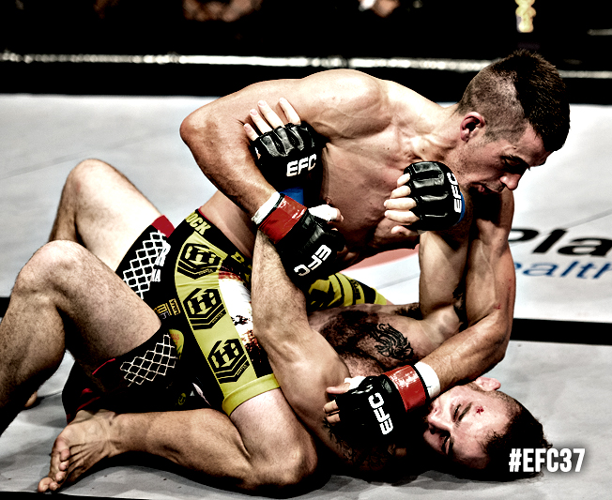 Johannesburg (South Africa) – The welterweight curse has become a notorious phenomenon in EFC. All eyes are on Adam ‘The Prodigy’ Speechly and David Buirski as one tries to end the curse and the other to prolong it. Even though the curse began with Speechly, Buirski is adamant that it will continue just a little bit longer on 21 February.

Buirski is not like most top tier MMA athletes. He runs a family business with his brother Gareth and fits his training into a full time work schedule. Originally this title fight was scheduled for December, but was postponed when Speechly suffered an injury and was postponed. For Buirski, this turned out to be a blessing in disguise. “You can imagine after a long hard year of work and training your mind, body and soul are pretty much drained from all the action, as we are pretty hands on in our job,” Buirski explained in an interview this morning. “I was training hard for the December bout and thought I was strong and ready. However, I had a little break in December. When I got back to into it, I realized how much clearer my mind was. My energy levels had risen greatly along with more of a drive to succeed in this fight. This is why I say it was a blessing in disguise.”

“Look you sit dreaming on how you could possibly finish each fight you go into and somehow on most nights it’s not how you thought it was going to go,” Buirski explained on how he sees the fight ending. “So if I get a KO it will be great, but I’m looking to grab and take any and every opportunity I get to finish the fight,” he concluded.

The welterweight curse has caught every champion since Speechly first lost the title to Dallas Jakobi and now has now finally regained the belt. Buirski weighed in on the topical curse with a strong conviction. “Yea the ‘curse’ is quite a thing,” he quipped. “I’m not really paying too much attention to it, but I am confident I’ll keep it running for just a little longer and then be the first welterweight champ to break the curse.”

“I don’t fight for a living,” stated Buirski. “I do this for the love of the sport and the competition which I’m addicted to. My drive to succeed and win this fight is not based on money and fame. But merely to prove to myself that I can and am able to hang with all these full time fighters. This means a great deal to me to prove to myself that I am capable of becoming the champion.”

“Adam is a great ambassador for our sport and a two time champ in the division,” Buirski spoke about his opponent. “I think he is going to bring out my full potential for all the fans to see. I believe Adam and I are both humble guys who don’t need to trash talk to hype a fight. We both wait for the night to prove our worth in the EFC Hexagon and the fight on the night will speak for itself. I look forward to 21 February and meeting him in the Hexagon,” he continued.

“Come fight night,” Buirski exclaimed. “I’ll leave it all in the cage and put on a great fight for all the fans!”