ALL EYES ON THE ULTIMATE RIVALRY AND DREADED CURSE 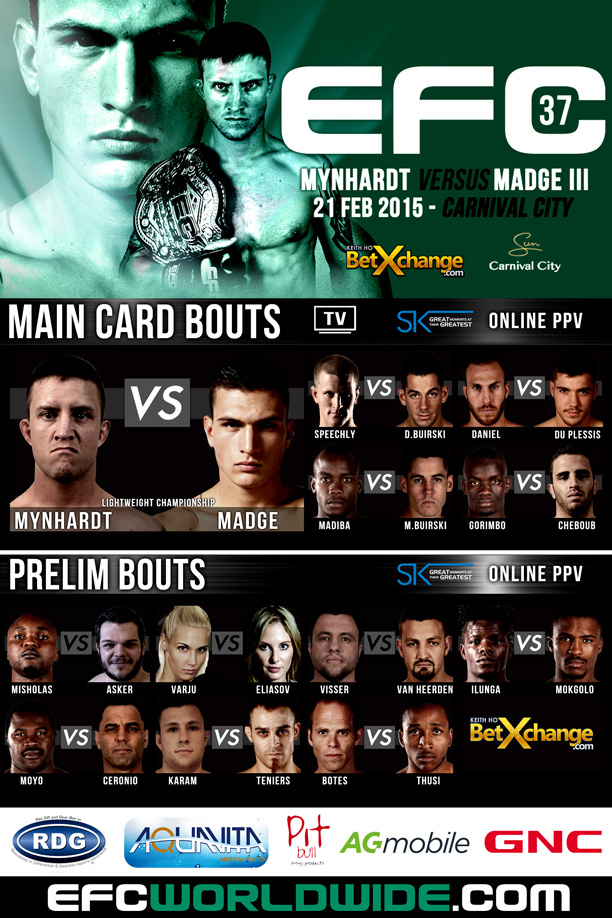 Johannesburg (South Africa) – On Saturday it will be just two weeks to go until EFC 37 at Carnival City in Johannesburg. Headlined by the lightweight title fight trilogy between Leon ‘The Iron Lion’ Mynhardt and Don ‘Magic Man’ Madge. You can expect an all-out war when these two step inside the Hexagon as neither of them wants this to end in controversy for a third time.

Co-headlining the main card will see the welterweight title belt on the line when Adam ‘The Prodigy’ Speechly attempts to break the dreaded welterweight curse that began with him and has come full circle. In contrast the contender David Buirski is one of the division’s strongest and most dangerous strikers and is looking to prolong the curse for just a little longer until he has the belt.

EFC 37 will see the fateful return of Darren ‘Double D’ Daniel to the Hexagon for the first time in two years. Now that his team mate Garreth McLellan had relinquished his title, he feels it is time to step up and make another run for the gold strap. He was set to face off with JP Kruger, who was forced to withdraw due to a spinal injury, the young and ambitious Dricus Du Plessis stepped up to take on the challenge. The former contender is coming off a loss to Daniel’s training partner McLellan and wants redemption for his first ever loss. Du Plessis who was in the process of cutting down to welterweight, even opted to stay at middleweight just for this bout.

The ever entertaining Tumisang ‘The President’ Madiba, riding a three fight win streak with three performance bonuses will face off against the tenacious Matt Buirski in a featherweight bout. Madiba is known for his explosive finishing skills, but has never been past the first round. Buirski is known for his conditioning and tenacity and has multiple finishes and decision fights. Both athletes are known for bringing everything to the Hexagon.

Opening the main card will see Zimbabwe’s Themba ‘The Answer’ Gorimbo as he prepares to go for his fourth straight win in EFC; having run through all his opposition to date. Standing in his way is one of the most experienced EFC veterans, Alex ‘The Professor’ Cheboub, a former title contender.

The card is rounded off with seven action packed preliminary bouts with some of the best MMA talents from around the world. Including the first ever EFC Women’s MMA bout between Hungarian Zita Varju and South African Danella Eliasov. Varju is coming in strong and hunting that EFC debut victory with her striking and submission skills. Eliasov is still an incalculable entity under the big lights and production of the EFC Hexagon but is known for her slick submissions.