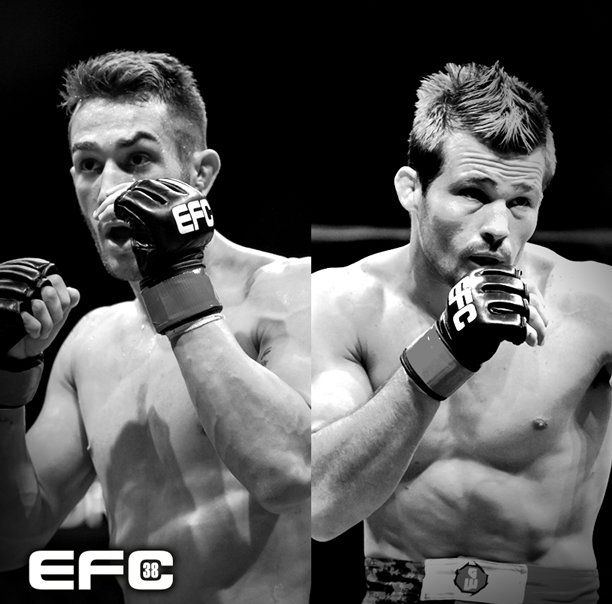 Johannesburg (South Africa) – At the beginning of last year Tyson Chelin was a virtually unknown within the EFC hexagon. Three phenomenal performances later, he is heading to the top of the featherweight division with a three fight win streak. As he hunts for the fourth consecutive victory, the powerful wrestler and knockout-artist Hanru Botha stands in his way.

Chelin made his EFC debut against Mbulelo Swekile in a one sided affair that went to points. In his next outing he faced EFC veteran Leo Gloss, where he showed his calm and accurate nature by efficiently dismantled the legend with a slick submission first round ankle lock. His most recent appearance saw him face the tenacious Matt Buirski in a three round back and forth war. He won that bout by the narrowest of margins via a split decision. A win for Chelin in Durban will cement his place in the upper echelon in the featherweight division.

His opponent is a Springbok wrestler with brutal one-punch knockout ability to boot. Botha has scored two massive walk-off knockouts over notable opponents Kanyeba Anicet and Nelson Feiteira. His only two losses in EFC have come from the reigning champion Boyd Allen and number one contender Wesley Hawkey, proving he belongs in the mix at the top of the division.

What will happen when accuracy and composure meet brute force in Durban?

EFC 38 is presented by BetXchange.com, returns to the Durban International Convention Centre, Durban, on Saturday 04 April 2015. Tickets on sale soon at www.computicket.com. Book your cinema ticket to all fights live and in state of the art digital projection at www.sterkinekor.com.