HEAVYWEIGHT TITLE ON THE LINE IN CAPE TOWN

Groenewald vs. van Zyl, 07 May 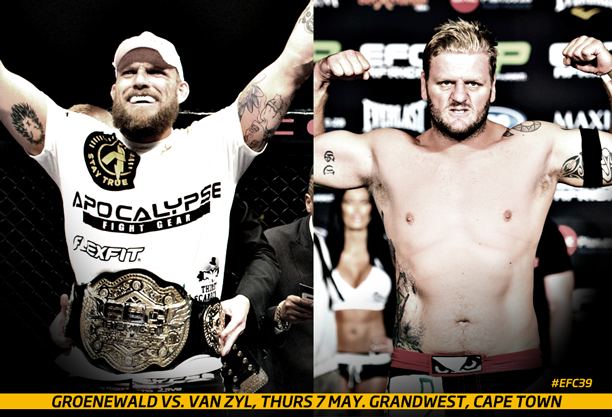 Johannesburg (South Africa) – In February 2014, Ruan Potts relinquished the EFC heavyweight title. The biggest division in EFC stood vacant until Brendon Groenewald claimed the belt with a monstrous knockout over the favourite Christophe Walravens. They say you are not the real champion until you have defended your title and at EFC 39, will have that chance against Andrew ‘One Gear’ van Zyl.

Now, over a year since his first ever loss and losing the heavyweight title to Potts, van Zyl has worked his way back up the rankings with a three fight tear through the division and is now coming for his former glory. Many believe the title rightfully belongs to van Zyl and in April he will have the opportunity to prove it.

Groenewald has had a difficult journey in the beginning of his Mixed Martial Arts career. Winning and losing evenly until he faced Vandam Mbuyi for the second time. Now he is riding a three fight win streak, the most recent of which he claimed the most prized of possessions, the EFC heavyweight title. This will be his biggest challenge in the Hexagon yet, when he faces the former champion.

Both athletes are known for their skills on the ground and knockout power, but come 7 May, who will walk out of the Hexagon the gold strap around their waist?

EFC 39: Groenewald vs. van Zyl is presented by BetXchange.com, and takes place at Grand West, Cape Town, on Thursday 7 May 2015. Tickets on sale soon at www.computicket.com. Book your cinema ticket to all fights live and in state of the art digital projection at www.sterkinekor.com.