New frontiers to be reached at EFC 37 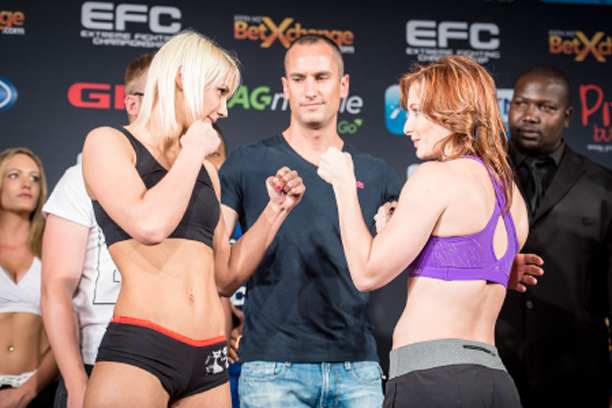 Johannesburg (South Africa) – The official weigh-in for EFC 37 played out to a boisterous crowd at the Sports Bar in Carnival City this afternoon. The room was filled with MMA fans anticipating EFC’s first event for the year, just over a week after EFC had been named the leading sports brand in Africa for the second year running.

The lightweight title fight between the lethal champion Leon ‘Iron Lion’ Mynhardt and the exciting Don ‘Magic Man’ Madge headlines Saturday’s event. This is the third meeting between these two, in which the organisation’s longest standing rivalry will come to a conclusion. The tension in the room was palpable as the two faced-off on stage.

“You can expect fireworks when we step into the Hexagon tomorrow night,” stated Madge. “We have done our homework and it will pay off,” responded the champion Mynhardt.

Co-headlining EFC 37, fans from around the world will see Adam ‘The Prodigy’ Speechly attempt to finally break the dreaded welterweight curse and retain his title when he faces a hungry David Buirski. This fight, initially scheduled for December, was pushed back by three months due to an injury to the champion. “I have been training for 5 months for this and tomorrow will be an explosive battle,” stated the challenger.

Also on the main card, EFC 37 will mark the return of crowd favourite Darren ‘Double D’ Daniel as he takes on the organisation’s most promising youngster Dricus ‘Stillknocks’ du Plessis. This will be Daniel’s first appearance in the Hexagon in over two years. When facing-off, Daniel shoved du Plessis, who remained defiant and attempted to shove back before officials separated the two.

The opening bout on the main card is between Themba ‘The Answer’ Gorimbo and Alex ‘The Professor’ Cheboub. Gorimbo came into the weigh-in in a very heated mood, screaming and shouting at his opponent as soon as he stepped off the scale. Cheboub managed a laugh at Gorimbo, which only seemed to rile him further.

In addition to a stacked main card, Saturday will see history be made as the first ever professional women’s bout will take place between South African Danella Eliasov and Hungarian Zita Varju. Speaking on the match up, EFC President Cairo Howarth expressed his excitement on the birth of a new frontier for MMA and promised the crowd that the ladies were going to leave nothing behind in an effort to put EFC’s newest division on the map.

One athlete initially failed to make weight with Lyle Karam weigh-in 1.4kg over his required category. Karam subsequently opted for a purse deduction, which was agreed upon with his opposition.

EFC 37 weigh-in results were as follows: