THROWBACK THURSDAY: NO PRESSURE FOR BOYD 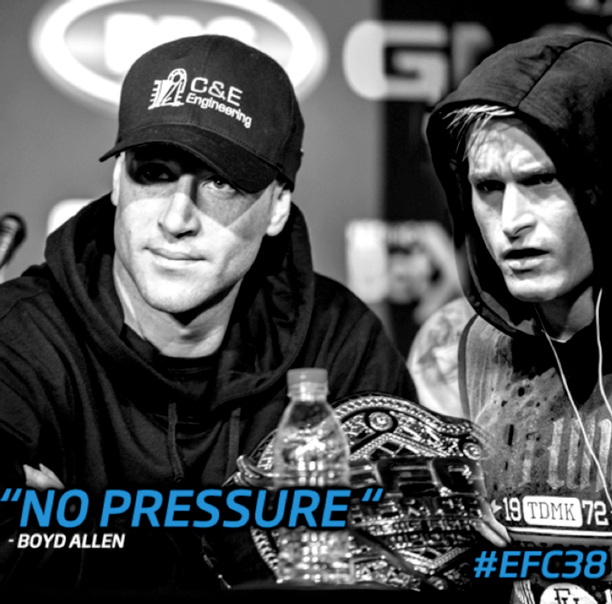 Johannesburg (South Africa) – At the EFC 36 post-event press conference, number one featherweight contender Wesley ‘Young Assassin’ Hawkey snuck into the accredited media section. His goal was to ambush Boyd Allen with a fight challenge at the upcoming EFC 38 in Durban.

Hawkey spoke into the Microphone: “So Boyd, how do you feel about a fight in Durban in April for the featherweight belt?” Allen responded simply and confidently: “No pressure.”

The stage has been set for the return to Durban shores. Hometown hero Hawkey is gunning for gold when he challenges Boyd Allen for the EFC featherweight belt. With the home town advantage Hawkey believes this his time to take the belt and prove he is the best in the division.

These two have met in the Hexagon before, which ended with Allen walking away with a first round submission. Hawkey won’t let history repeat itself and has grown with his three consecutive victories since. Meanwhile, Allen has claimed and defended the featherweight belt and in so doing proven he is a near unstoppable force in EFC.

Will Allen repeat history and further cement his reign at the top of the division or will Hawkey bring about a new era?