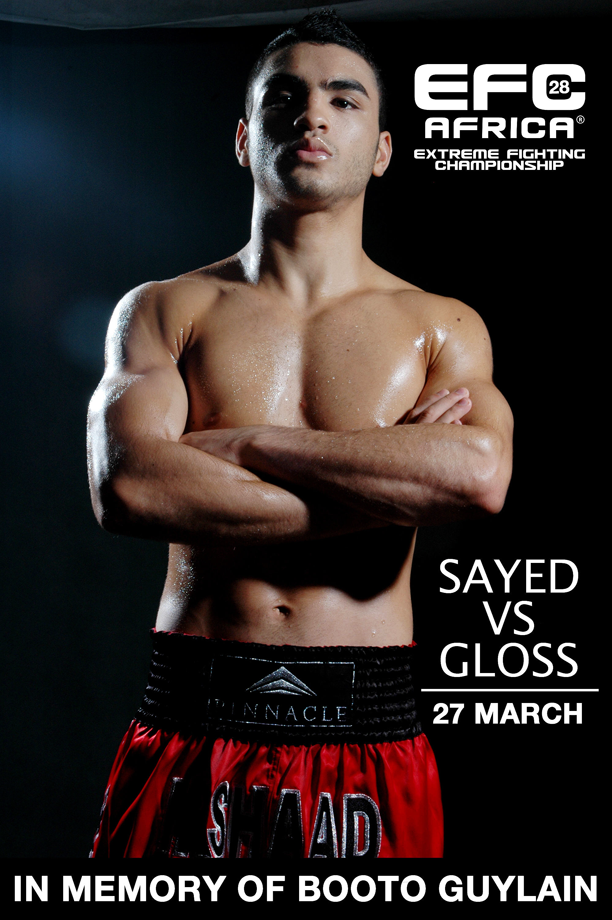 A two time world Muay Thai champion and current Chinese MMA champion, Sayed was born in Cape Town and began kickboxing at the age of 15. At 17 he moved to Thailand with the goal of training and fighting at the sport’s source.

He soon won the WPMF Lightweight world title (2007), the South African National Kickboxing Championship (2007), and the WMC I-1 Asia Championship (2008). It was during that time that a Thai promoter gave Sayed his fight name ‘White Tiger’, in recognition of his powerful and spectacular style.

In 2010 Sayed made the transition to MMA, announcing his talent with a first round knockout of highly rated athlete Ngoo Ditty. In February last year, with a pro MMA record then reading 5-2, he challenged for the RUFF (Ranik Ultimate Fighting Federation) bantamweight title, and took victory by TKO (second round) after a searing striking display. The title was a double victory. With it Sayed is now recognised as the Chinese bantamweight champion.

Of Sayed’s six pro MMA wins four have come by T/KO finishes inside two rounds, one by submission in the first, and one by split decision. He is a sensational athlete making excellent use of his world champions’ level Muay Thai skills. In his four years of competition and current residence at Evolve MMA in Singapore, his ground game has been honed to international level also.

With his addition the EFC AFRICA bantamweight division has gone from tightly contested to white hot. Current champion Nkazimulo Zulu will be watching Sayed’s debut closely, as will former, undefeated featherweight champion Demarte Pena. Gloss will be in for the fight of his life on March 27.

“I’m really proud to be an EFC AFRICA athlete,” said Sayed. “I’m very excited to fight in my home country again. When I join any promotion my goal is always to be the champion.”

Sayed currently lives and trains in Singapore, and will do so for the foreseeable future. Learn more about him at www.irshaadsayed.com, and follow him on Twitter at @IrshaadSayed for regular updates.

Sayed, Gloss, and all athletes competing at EFC AFRICA 28 will wear black armbands in honour of deceased athlete Booto Guylain.

EFC AFRICA 28, presented by BetXchange.com, takes place on Thursday 27 March 2014 at the Coca-Cola Dome, Johannesburg. Tickets on sale now at www.computicket.com. Stream the entire event, live and in HD, from efcworldwide.com/efc_africa_404.php.