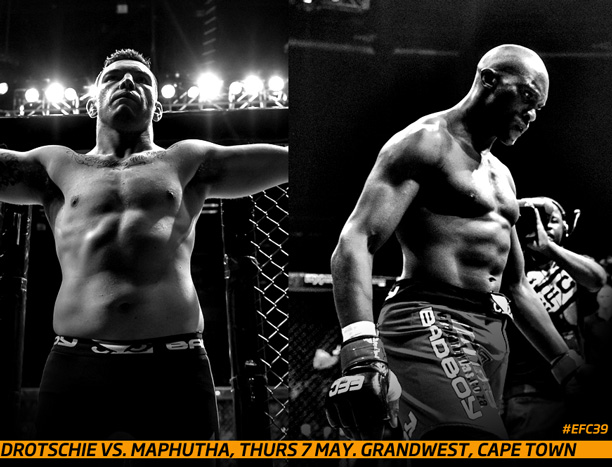 Johannesburg (South Africa) – On 27 January it was announced that Cape Town’s Gideon ‘Juggernaut’ Drotschie would get his shot at redemption for his only loss in the Hexagon. Unfortunately due to personal reasons, Norman ‘Chef’ Wessels has been forced to withdraw from the EFC 39. Contender Tumelo ‘The Truck’ Maphutha has stepped up to the challenge and will face Drotschie in Cape Town in May.

Credit must be given to both Maphutha and Drotschie who have given up definite title shots for this number one contender bout. Everything is on the line in the light heavyweight division.

Maphuta is known for his deadly one punch KO power, which was proven when he won by verbal submission against Frasier Opie. He then went on to dominate another veteran of the Hexagon, Danie van Heerden, in a three round decision. Maphuta left van Heerden bloodied after their war. Still holding the record for quickest KO in EFC history, Maphuta is dangerous in every stand-up exchange with very few athletes willing to stand and trade with him.

Drotschie is coming off his first ever loss when he lost via a TKO (doctor’s stoppage) in the fourth round. Added to being his first ever loss, he also lost the title and is now hungrier than ever to reclaim his crown. He will stop at nothing become the unstoppable force as ‘The Juggernaut’ he once was and get what he believes to be rightfully his.