Terblance Versus Robinson, The Mirror Match 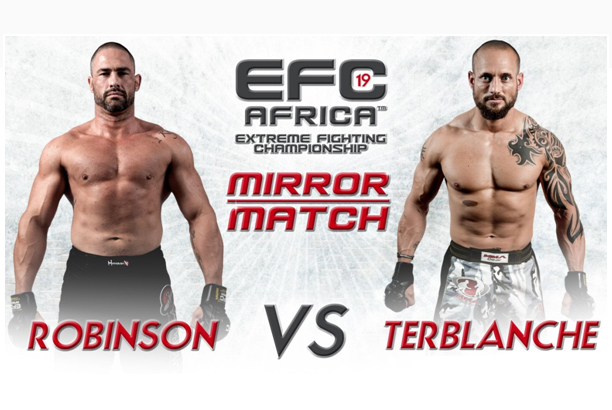 Johannesburg (South Africa) – On April 19 Paul ‘Terror’ Terblanche will take on Sean ‘The Monster’ Robinson in a fight that for these two is a long time in coming. Both athletes are known for their incredible power and hard core striking; ‘The Monster’ is a Karate champion while Terblanche is the previous holder of EFC AFRICA’s fastest KO record, finishing Janus de Lange in just eight seconds. Having known each other for some time they sat down to an interview that revealed a comic streak in both, and the intent to do serious harm come April 19.

YOU ARE BOTH SIMILAR FIGHTERS IN MANY WAYS. WHAT DO YOU THINK IS GOING TO SEPARATE THE TWO OF YOU?

Robinson: I disagree that Paulie and I are similar. I would never push and try to intimidate an opponent at the weigh-ins like he does. If he tries that with me I am going to drop him, on stage, like a toilet seat.
Terblanche: He’s an accountant, I run a fitness centre … I need the money more! No, jokes aside. Sean has had two fights in EFC AFRICA, both against Raymond Ahana. I have had four fights, all against different opponents. I have a fantastic team behind me, I’ve made the cut to middleweight many times before, he’s never done it, and, I might not be a spring chicken myself but Sean is still almost two years older than me.

IS IT TRUE THAT YOU SPECIFICALLY REQUESTED A FIGHT AGAINST EACH OTHER? WHY?

Robinson: I asked for him at the beginning of this year but apparently he had a serious right bicep injury as a result of severe overuse. I’m happy with the fight. It’s good to test myself against someone almost as strong as I am.
Terblanche: It is absolutely true! In early 2011 Sean was the rep for my supplement sponsor. When he joined EFC AFRICA I jokingly said “let’s fight one day.” I challenged him in early 2012 but the answer was “no, he’s LHW, you’re a MW.” I announced that I would fight LHW in future but the next time I challenged him the answer was “no, you’re a LHW, Sean is going down to MW.” On 28 December I saw Sean proudly tweeted that he has now “filled out to a healthy 103kg”. I asked what happened to his MW plan and he said it’s still 100% on track. I then challenged him again, EFC AFRICA listened, and the rest is history!

YOU AND PAUL RECENTLY POSTED CHALLENGE VIDEOS TO EACH OTHER ON YOUR EXPLOSIVE, STANDING JUMP ABILITY. IN WHAT OTHER PHYSICAL AREAS DO YOU THINK YOU GUYS DIRECTLY COMPETE?

Robinson: Nope, he came up with that idea all by himself, we’re all very proud of him. By the way his little clip isn’t really correct as my trainer pointed out to me: if he does the jump test correctly from standing dead still after a full weightlifting workout like I did and at a bodyweight of 100kg like I was (he looked around 77kg), then it’s apples against apples. But Paulie knows this and he hoped no one would realise he’s taking a shortcut.
Terblanche: I’m not sure. I haven’t done a deadlift in years. We focus more on body-weight exercises, pull-ups, running on the beach, carrying sandbags, MMA related stuff. I just saw his video and thought it would be fun to show that anything he can do, I can do better.

IS THERE ANY PHYSICAL AREA WHERE YOU BELIEVE YOU HAVE THE CLEAR ADVANTAGE, OR OTHER AREA OF YOUR FIGHTING SKILLS?

Robinson: I speak much, much better English.
Terblanche: Ha, ha. My endurance is a lot better than his. Sean has huge muscles, which need huge amounts of oxygen. This is no bodybuilding show.

DO YOU HAVE ANY WORDS FOR PAUL?

Robinson: Two things: Just a reminder that he will be facing an opponent where for the first time he can’t use his size or strength to intimidate, and I’d like to thank him for being open-minded enough to allow his wife to ‘like’ my Facebook fan page, which she did the week our fight was announced. I asked my wife to also ‘like’ his page but she declined – she believes I’ll win. Sorry Paulie, I tried.
Terblanche: Come prepared, buddy.

ANY WORDS FOR THE FANS?

Robinson: It’s been said many times but it is so true that it needs to be said again: Without all the guys and girls supporting me and the other EFC fighters, and all the Cape Town boys supporting Paulie, we wouldn’t be able to do this! Secondly, don’t blink…
Terblanche: Thank you to all my loyal supporters! My EFC AFRICA career has had its ups and downs, I’m in better shape than I’ve ever been and I plan on making everyone proud.