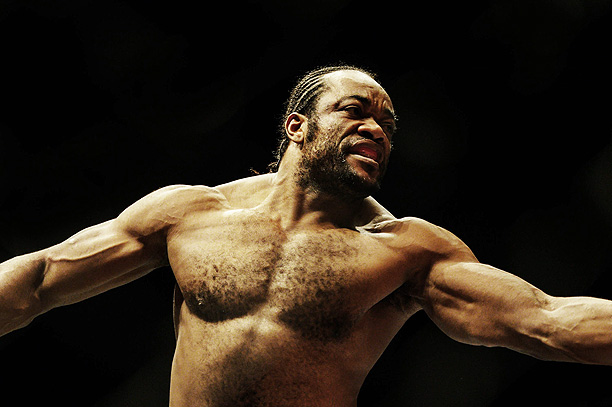 Johannesburg (South Africa) – The decision to disqualify Vandam Mbuyi during his first encounter with Brendon Groenewald last month (February 27) has been overturned. Mbuyi reverts back to a three fight win streak, and Groenewald to a loss to Bernardo Mikixi at his last encounter.

The result of that bout was ruled a ‘No Contest’ by EFC AFRICA officials yesterday, after an inquiry submitted by Mbuyi’s camp earlier this month.

Vandam and Groenewald first faced off at EFC AFRICA 27, where Mbuyi was disqualified after he landed an unintentional groin strike immediately followed by a blow to the back of Groenewald’s head, which floored him.

Referree Ian Pienaar disqualified Mbuyi on the grounds of a double foul and ignoring an official warning.

In the official document submitted by event representive Jason Bezuidenhout yesterday, referee Ian Pienaar’s ruling was reversed on the grounds that the warning Pienaar issued Mbuyi during the bout came after Vandam landed the illegal back of the head strike, not before.

On the matter of whether Groenewald should have been given five minutes to recover, the officials maintained an unequivocal ‘no’, as Groenewald appeared unfit to continue.

“Blows to the back of the head are dangerous and unacceptable,” said EFC AFRICA president Cairo Howarth. “Although it’s been shown that Vandam’s strike was unintentional, we’re happy that Ian Pienaar reacted swiftly and strongly. That said, it’s excellent news that the correct decision is being upheld.”

The score between Vandam and Groenewald will therefore finally be settled tonight, at EFC AFRICA 28. Should Vandam take victory he will find himself on a four fight win streak and undoubtedly a top contender for a shot at the currently vacant heavyweight belt.