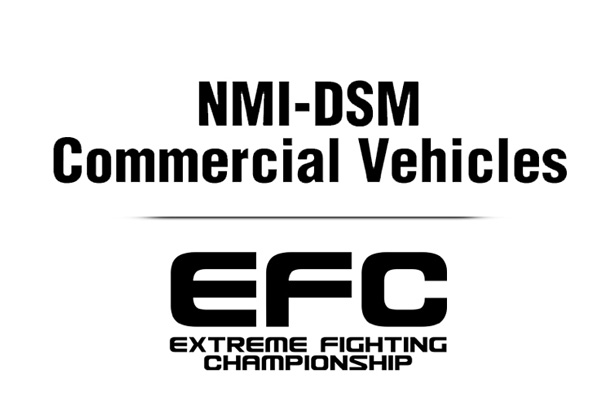 Durban, South Africa – The leading player in KwaZulu-Natal’s vehicle industry, NMI-DSM Commercial Vehicles, has added power to mixed martial arts in the region by officially partnering with all EFC Durban events in 2015, kicking off with EFC 38 this Saturday.

NMI-DSM Commercial Vehicles, a division of NMI DSM Pty Ltd, the region’s agents for Mercedes Benz, Chrysler, Jeep, Dodge, Freightliner, Fuso, Mitsubishi and GWM Motors, has supported the sport for numerous years, sponsoring the likes of Abdul Hassan, and now takes its involvement to the next level with this partnership.

“NMI-DSM Commercial Vehicles are proud to be associated with EFC,” said NMI-DSM Director Nizam Akoob Khamissa. “EFC athletes are the kings of the Hexagon, and Freightliner is the king of the road. It takes a lot to stop a Freightliner!”

“It is fantastic to have NMI-DSM Commercial Vehicles getting so involved in MMA,” said EFC President Cairo Howarth. “They have massive brands and offer EFC fans great deals on motor vehicles, big and small.”

Fans attending EFC at the Durban ICC this Saturday will be treated to a display of some of the most exclusive NMI-DSM vehicles and power trucks, as well as to numerous giveaways and competitions.