GRANDWEST ON A KNIFE’S EDGE

GRANDWEST ON A KNIFE'S EDGE 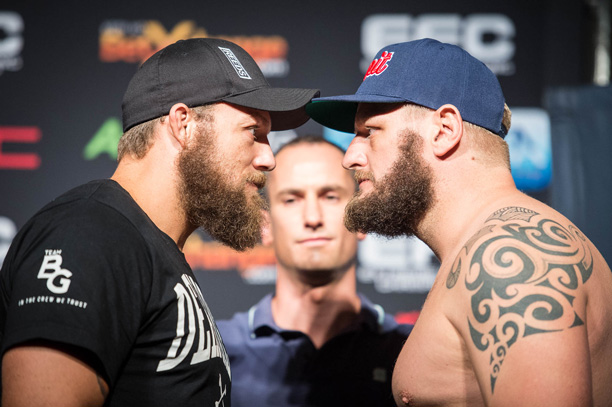 Cape Town, South Africa – The official weigh-in for EFC 39 took place in front of an excited crowd in the Market Hall, Grand West this afternoon. The room was swarming with many of Cape Town’s loudest MMA fans showing support for their hometown heroes as they stepped onto the scale.

The heavyweight champion Brendon Groenewald and challenger Andrew ‘One Gear’ van Zyl were the epitome of calm as they stepped on the scale and faced-off, a day before what is sure to be one of the most explosive bouts of the year. Neither showed any signs of nerves before the biggest battle of their careers.

“I like to bang and tomorrow that’s what I am going to do,” stated the challenger when asked what his thoughts were ahead of the bout.

Featuring on the main card, Gideon ‘Juggernaut’ Drotschie takes on Tumelo ‘The Truck’ Maphutha in a number one contender bout. The winner will earn the right to challenge Norman ‘Chef’ Wessels for his light heavyweight title. Neither athlete can afford to leave anything in the Hexagon with a shot at the title on the line.

Also on the main card, fans are looking forward to a battle with two of Cape Town’s most favoured sons. Don ‘Magic Man’ Madge and Regis Muyambo faced-off ahead of their highly anticipated fight. In what many are predicting to be a walk in the park for Madge, Muyambo has nothing to lose and will be going all out for a career defining bout.

Fans erupted with chants for DRC native Champion Dalcha on stage. What started off on as an intense stare down between Dalcha and England’s Yannick Bahati, quickly escalated to butting heads. The two athletes were forcibly separated by extra security.

The opening of the main card will see Cape Town’s Irshaad ‘White Tiger’ Sayed take on Oumpie ‘Lion Heart’ Sebeko from Johannesburg. Sebeko’s coach and Sayed have been exchanging over twitter throughout he build up to weigh-in and the dislike for each other was palpable when Sayed and Sebeko clashed heads for the first time. Before the two were separated, Sebeko managed to slap Sayed. Ever the showman, Sayed responded on twitter immediately after the weigh-in with: “That was the only time you will be able to lay a hand on me Oumpie, come tomorrow I will destroy you.”

In addition to a stacked main card, EFC will see England’s Joe ‘Silk’ Cummins in his EFC debut against Cape Town’s Marcel ‘Little Hammer’ Teniers in what can be described as potential technical war, plus former lightweight contender Sibusiso Mdoko takes on up-and-comer Luke Michael.

EFC 39 weigh-in results were as follows: