HE IS GOING TO PLAY MY GAME

Dricus du Plessis has big ambitions in the welterweight division 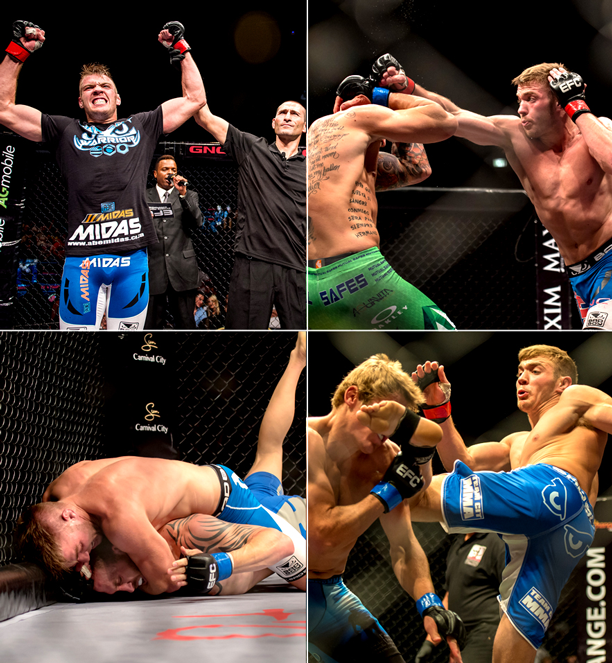 Johannesburg, South Africa – Dricus ‘Still knocks’ du Plessis is on a mission to take Demarte Pena’s accolade and become the youngest EFC champion in history. He came close last year when he faced Garreth Mclellan in Durban for the middleweight belt, and many believed he was eligible for another shot at the title after he defeated Darren ‘Double D’ Daniel at Carnival City. However, Du Plessis has decided to drop down to the stacked welterweight division to accomplish his dream, a dream he has only one year left to make a reality. Standing in his way of realizing his ambition and possibly getting another title shot is the former welterweight champion Dino ‘The Lion’ Bagattin. The two dynamic strikers are set to meet as the headlining bout of the milestone EFC 40 event at Carnival City on 6 June.

“I am after my goal of becoming the youngest champ in the organisation and getting more titles in our gym,” explained du Plessis in an interview this morning. He added, “My teammate, Michiel Opperman, will be fighting for the middleweight title soon, so the best thing to do for me and the team was to drop down to welter.”

Du Plessis went on to talk about the reasoning behind the category change and how he and his team came to decide on it. ”In the beginning I wasn’t really for the idea,” du Plessis began. “But we decided as a team that it was for the best to get as much gold in the gym as possible. As I said earlier, Michiel has a shot at the middleweight title so it won’t make sense for me stay at middleweight. I think welterweight is going to be a great new chapter in my career. I feel a lot faster and more dynamic at this lighter weight. I think I might have the power advantage over other welterweights too.”

Du Plessis is excited to get going in his new division and just wants to fight as much as he can. “Well I feel now that I am in such a stacked division I hope I can get more fights. I love to fight and I love to compete,” du Plessis stated. “The welterweight division has crazy talent and a lot of top level guys as well as up and coming fighters that are very exciting. How do I stack up against them, well that question will be answered at EFC 40.”

Du Plessis will be facing EFC veteran and former welterweight champion Dino Bagattin, who beat du Plessis’ teammate Opperman for the welterweight belt. After loosing the title and then subsequently winning his next bout, Bagattin moved training facilities to Fight Fit Militia, a challenging team that du Plessis welcomes. “In the Hexagon you know the fight is going to be hard and very competitive. FFM is good at what they do and you can’t take that away from them. Dino made a good career move to go there but I don’t feel it’s going to change the outcome of the fight with me walking away as the winner!”

Fans can often forget how young du Plessis is, and at just 21 years of age he is competing against veteran athletes that he looked up to just a few years ago. “Dino has been in the game for years, even before I started MMA. I think he is a very good fighter and always shows up for a fight, not just a payday,” du Plessis explained. He went on to add, “I think he is going to bring the best out of me. He is very fast when it comes to boxing and I feel my speed is one of my best aspects in the stand-up area. He brings new challenges to the table, but nothing we haven’t seen yet. At the end of the day it is about me not about him. He is going to play my game.”

Du Plessis added to why his upcoming bout is a great matchup. “I feel I never put on a boring fight and I can say exactly the same of Dino. We both go out there with one goal in mind and that is to finish the fight in spectacular style. Fight fans, you are guaranteed to see a very explosive fight where two guys will put their bodies and everything they have on the line to take home the win.”

When asked about his title aspirations and how many believe that he deserves another middleweight title shot after his last performance he responded, “I feel that I can get the title shot after this fight, it isn’t a demand or a statement, just something I feel I will deserve if I can beat Dino convincingly. I feel at middleweight I was the next contender after beating Darren Daniel. I have a goal to be the youngest champ in EFC history and I need that title this year so I will do what I have to, to get that title shot”.

He concluded the interview with a shout out to the ‘Stillknocks’ fans, “you guys are awesome and you can once again prepare to be amazed!”