ONE PUNCH, ONE GEAR 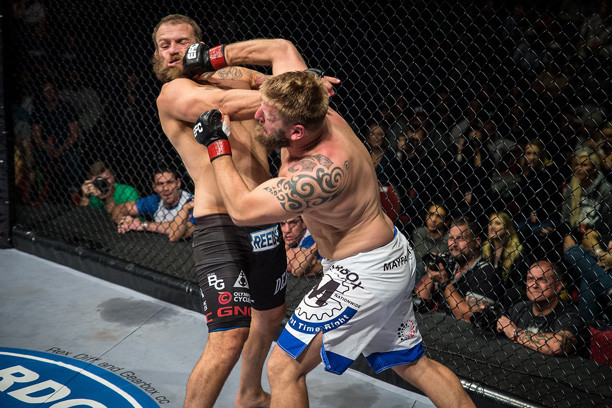 Cape Town, South Africa – An enthusiastic Cape Town crowd bore witness to EFC 39 at Grand West in Cape Town this evening. The arena was treated to a night of heavy knockouts and three round wars.

Heavyweight Andrew ‘One Gear’ van Zyl put in a dream performance by scoring a spectacular one punch KO over Brendon Groenewald to reclaim the heavyweight title. The two began at a blistering pace, exchanging massive punches that ended with Van Zyl connecting a left-right combo that sent Groenewald to the canvas after only thirty two seconds. Never one to mince his words, Van Zyl stated in his post-fight interview, “I came to throw punches and that is exactly what I did.”

Cape Town’s Gideon ‘Juggernaut’ Drotschie faced the Tumelo ‘The Truck’ Maphutha with the prospect of a light heavyweight title shot against Norman ‘Chef’ Wessels for the winner. Drotschie’s game plan seemed to be to stay out of Maphuta’s range and pick his opponent off. With a gun shy Maphuta at the other end, this resulted in a less than spectacular showpiece from both fighters. The bout ended with a majority decision win for Drotschie and the disgust of an audibly disappointed crowd. Such was the disappointment of the spectacle, that EFC president Cairo Howarth retracted the title shot with a statement at the post event press conference, and handed it to Champion Dalcha. “That was not the fight the fans paid to see. Neither of you deserve to fight for the title right now. Champion Dalcha will fight ‘Chef’ for the title.”

The third bout on the main card ended in the very last second of the first round. Regis Muyambo attacked the former champion Don ‘Magic Man’ Madge from the first bell, looking to take it to the ground. A composed Madge was prepared for Muyambo’s advances and repelled with an attack of his own. Once reversed, Madge proceeded to ground and pound until the referee called a stoppage just before the bell.

DRC born Cape Town favourite Champion Dalcha managed an impressive unanimous decision win over British debutant Yannick ‘Black Mamba’ Bahati. In a stand up bout which neither athlete really connected anything of substance, it was Dalcha’s aggression and the odd takedown that scored him the victory. Dalcha will now face Wessels for the light heavyweight title in Cape Town in August.

The heavily favoured Irshaad ‘White Tiger’ Sayed dominated Oumpie ‘Lion’ Sebeko in the first fight on the main card. Sayed maintains his contender spot in the bantamweight division. Sebeko showed a much improved all round game that earned himself a performance bonus, but still fell short as Sayed dominated exchanges standing and in the grappling stakes.