A MASSIVE RETURN TO CAPE TOWN 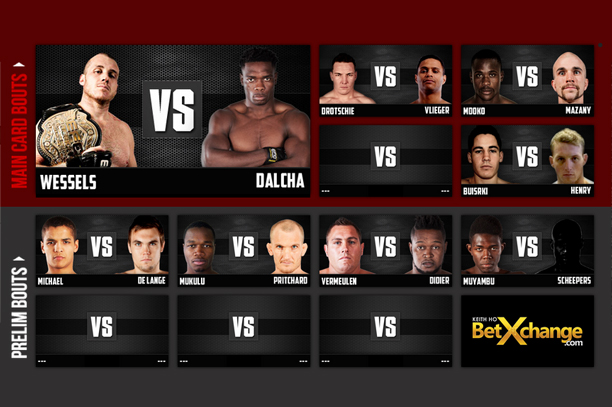 The last time EFC was in Cape Town, EFC president Cairo Howarth announced that the undefeated Champion Dalcha would get a shot at the light heavyweight title against Norman ‘Chef’ Wessels in place of Gideon ‘Juggernaut’ Drotschie. This was met with cheers of joy from the local crowd. Dalcha is riding a four fight undefeated winning streak since joining with the organisation. Rising to the challenge on every occasion, he has beaten two of his opponents on late call-ups as a replacement athlete. The former heavyweight and current light heavyweight champion Wessels, is determined to keep his belt. Confident in his abilities, he is content to defend it in the challenger’s home turf and in front of the challenger’s home fans.

Also featuring on the main card Drotschie will enter to the Hexagon with a chance at redemption for his previous performances. The former champion will welcome Belgium’s Mark Vlieger in his highly anticipated EFC debut. Vlieger is a highly experienced kickboxer, having competed on the biggest promotions in Europe and will bring the fight to Drotschie. No slouch on the ground either, Vlieger has won the majority of his bouts via submission. Now the question is, will Drotschie give the fans what they are asking for?

Fresh off a performance bonus winning fight, former lightweight contender Sibusiso ‘The Monster’ Mdoko will welcome Dave ‘The Pain Train’ Mazany back into the EFC Hexagon. The last time Mazany competed in the Hexagon, he faced then champion Wentzel Nel and won via rear-naked choke in the first round. Now ‘The Pain Train’ is back, and wants to make a case for contendership in the stacked lightweight division.

Opening the main card in Cape Town will see the return of Scotland’s Danny Henry. Having made quick work of Hanru Botha at EFC 40, Henry called out Matthew Buirski at the post-event press conference. Buirski last competed against Tumisang Madiba, where he won a dominant three round decision. Wanting to follow in his older brother David’s footsteps, Buirski is eager to prove he belongs at the top of the division and to fight for the title one day.

Keep watching for many more epic bouts still to be announced for the upcoming Cape Town card in August. Tickets on sale now.

EFC 42: Wessels vs. Dalcha, presented by BetXchange.com, and takes place at Grand West Cape Town, on Saturday 8 August 2015. Tickets on sale at www.computicket.com. Book your cinema ticket to all fights live and in state of the art digital projection at www.sterkinekor.com.