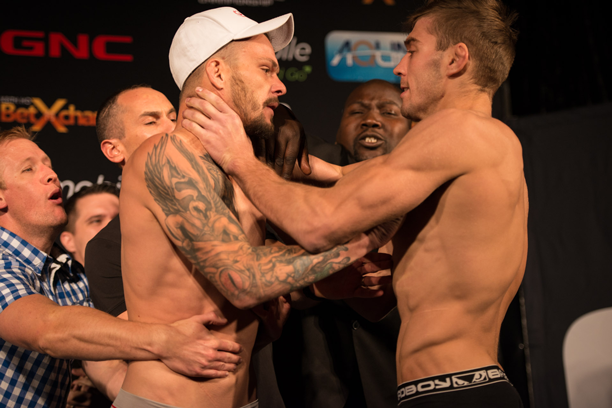 Durban, South Africa – The official weigh-in for the milestone EFC 40 event took place in front of a tension filled room at Carnival City this afternoon. Fans bore witness to their favourite athletes exchanging heated face-offs ahead of tomorrow’s main event.

Headlining EFC 40 is the explosive matchup between the former welterweight champion Dino ‘The Lion’ Bagattin and the young MMA sensation Dricus ‘Stillknocks’ du Plessis. Seconds after weighing-in, the adrenaline got the better of the two as they faced off. After a heated exchange, which saw du Plessis grab Bagattin by the throat, they had to be separated by security and calmed down before their interviews with Dirk Steenekamp. Both athletes promised the fans to expect fireworks when they finally step into the Hexagon tomorrow.

In the penultimate bout of the evening, Ruan ‘Fangzz’ Potts returns to the Hexagon to face the impressive Frenchman Cyril ‘Silverback’ Asker, who dismantled Ricky Misholas in his EFC debut. Both athletes were supremely confident stepping onto the scale ahead of a titanic heavyweight clash that is sure to enthrall the crowd.

Also on the main card is the second fight in EFC for Irishman Peter ‘Showstopper Queally, who faces off against Igeu ‘Smiley’ Kabesa. Queally looked comfortable in his new weight class, having dropped from welterweight to square off against Kabesa who is yet to be defeated in five fights for the organisation.

Former teammates Wade Groth and Brendan Katz shared a friendly exchange after comfortably making weight. A visibly bulked Groth is looking to get back to winning ways after his loss to Boyd Allen, while Katz is looking for redemption after succumbing to Wesley Hawkey. In a match up between two athletes with a penchant for throwing serious leather, this has been mooted by many as a potential fight of the night.

Rounding off the main card is the ever-exciting Hanru Botha, who welcomes Scottish debutant Danny Henry into the Hexagon at featherweight. Botha, a wrestling specialist with a predilection for huge knockouts, has his hands full in Henry who holds a pro MMA record of 4-1 coming into the organization.

The full EFC 40 weigh-in results were as follows: