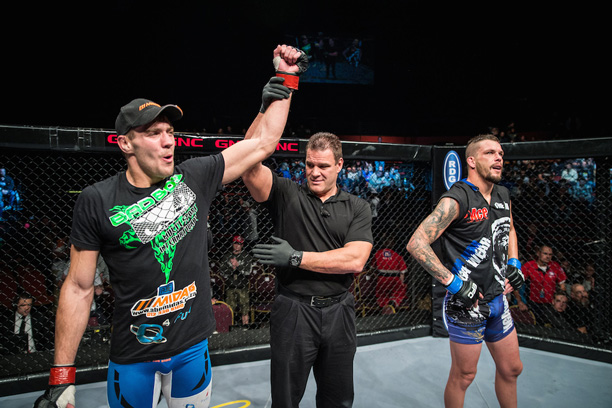 Johannesburg, South Africa – The landmark EFC 40 event took place tonight in front of a capacity crowd at Carnival City, Johannesburg. The electric crowd was treated to a night of outstanding fights from start to finish.

The main event featured former welterweight champion Dino ‘The Lion’ Bagattin and the young sensation Dricus ‘Stillknocks’ du Plessis. The contest began at a high pace and maintained that level throughout. From the start, Bagattin and du Plessis exchanged massive punches and kicks in a frenetic first round. Midway through the second, du Plessis shot for the take down. After a back and forth scramble, the youngster took advantage of an error from Bagattin and showed his proficiency by taking his opponent’s back and sinking a tight rear naked choke, forcing him to tap.

A jubilant du Plessis expressed his delight at his performance and thanked the crowd in attendance, “If you guys enjoyed my fight, then I enjoyed it.” A veteran of the organisation, Bagattin promised the crowd he’d be back as always, ready to give the fans another show.

The penultimate bout of the evening saw former UFC heavyweight and EFC champion Ruan ‘Fangzz’ Potts make his anticipated return to the Hexagon to face Frenchman Cyril ‘Silverback’ Asker. Potts took the fight to Asker, going straight for the take down from the get go. Taking advantage of his position, Potts laid down heavy ground and pound, opening up a laceration on Asker’s eye. Surviving the initial onslaught, Asker reversed positions and rained down with heavy ground and pound of his own. A visibly battered Potts failed to answer the second round bell, resulting in a verbal submission victory for Asker. EFC president Cairo Howarth confirmed in the post event press conference that the Frenchman will be facing Andrew van Zyl for the heavyweight title in October.

Wrestling sensation Igeu ‘Smiley’ Kabesa extended his undefeated winning streak to six fights with a dominant display over Irishman Peter ‘Showstopper’ Queally. Kabesa looked to be on his back foot for the entire fight, he used his position to counter and score massive takedowns, thereby completely nullifying Queally’s advances. Queally failed to launch an effective offense, which ultimately lost him the fight to a surprising split judges’ decision.

In the event’s fight of the night, Brendon Katz and Wade Groth put on an unforgettable war that left the fans in the arena on their feet. For every shot Katz landed, Groth reciprocated and then some. Ending in a unanimous decision in favour of Groth, both athletes walked out of the Hexagon to rapturous applause from the crowd.

Opening the main card was Scottish debutant Danny Henry and the exciting Hanru Botha. Botha, a tough wrestler from Polokwane, began the fight doing what comes naturally – going straight for the double-leg take down. The Scot showed his pedigree by keeping calm and sinking in a triangle choke from his back to seal the win early in the first round.

Fight of the Night was awarded to Katz vs. Groth for their three round epic. Performance bonuses were awarded to Europeans Tomasz Kowalkowski and Cyril Asker.

EFC 41: Pena vs. Doyle, Opperman vs. Cleland, presented by BetXchange.com, and takes place at Carnival City, Johannesburg, on Saturday 11 July 2015. Tickets on sale soon at www.computicket.com. Book your cinema ticket to all fights live and in state of the art digital projection at www.sterkinekor.com.