Pena and Doyle hold nothing back ahead of title fight 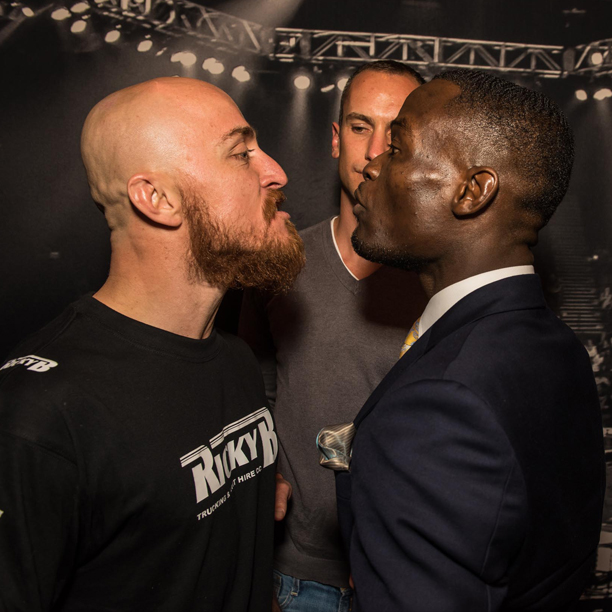 Johannesburg, South Africa– This morning, during Doyle’s media day interview and prior to standing face-to-face with Pena, Doyle made a big statement, “Demarte is going to have to reconsider his profession,” in reference to Pena being a full time athlete which Demarte has criticised Doyle of not being. Doyle added, “After the first round of the fight, he will know he is going to lose.” Pena responded in his interview, “He is going to feel what it is like to face a real champion. He will never take this belt from me.”

After all interviews were completed and it was time for champ and challenger to face off, energies were escalated to maximum when the two stood eye-to-eye for the first time and tempers flared. Both men held nothing back during a heated exchange of threats with both refusing to back-off. EFC president Cairo Howarth was forced to separate the two men and Pena left the event immediately.

The official Media Day for EFC 41 took place earlier today in front of a crowd of media and fans at Carnival City. Most of the athletes competing next Saturday were in attendance middleweight contender Michiel Opperman. Notably, Opperman’s opponent, Liam Cleland was not present, and has not commented about his absence. Opperman was very unimpressed by Cleland’s no-show and simply stated, “Liam is unprofessional for not being here.”

In addition to media and fans having access to the athletes for exclusive interviews and photo opportunities, all athletes were interviewed about their upcoming bouts and their opponents by EFC matchmaker Graeme Cartmell and lots of free merchandise was given out to the fans in attendance, along with refreshments thanks to bear.CLAW energy drink and AquaVita Mineral Water.

Stay tuned for all the interviews and video footage from the day to be released on www.efcworldwide.com soon.