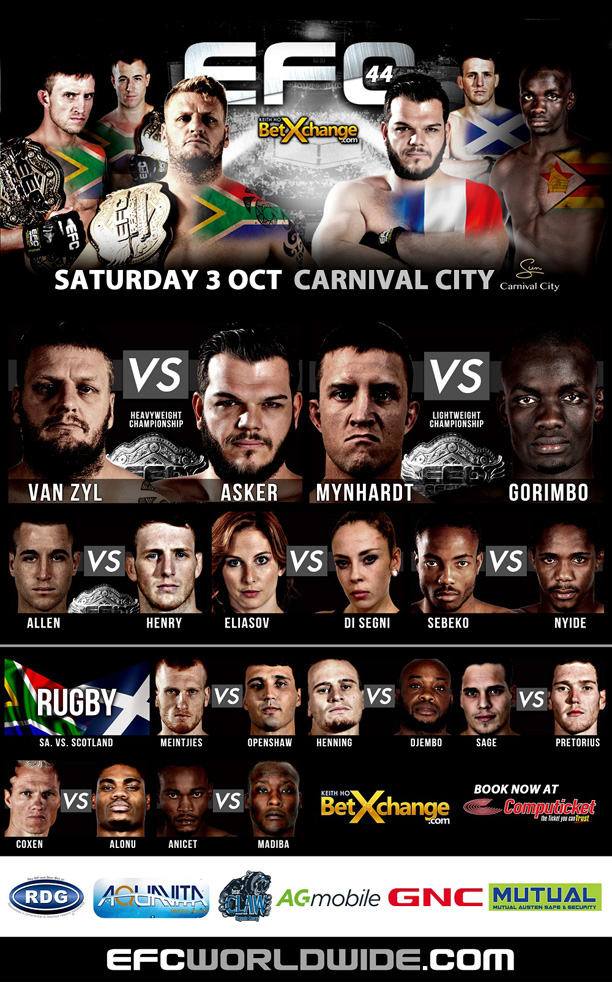 Johannesburg, South Africa – EFC returns to Carnival City with the biggest foreign invasion in history! Three championship fights go down this Saturday; it does not get any bigger than this!

In the heavyweight division and in what EFC pundits are calling the heavyweight matchup of the century, the champion Andrew ‘One Gear’ van Zyl from South Africa collides with the Frenchman Cyril ‘Silverback’ Asker in a 5 round championship battle. The fate of seemingly similar fighters from contrasting backgrounds will intercept and only one will stand victorious.

Plus, the dominant South African Boyd Allen puts his featherweight belt on the line against Scotland`s Daniel Henry in what is sure to be a technical war of sniper like accurate striking.

But first, the man from Zimbabwe, Themba `The Answer` Gorimbo, who came from nothing and has risen to stardom, faces his nemesis and perhaps the most dangerous striker in the organisation, the lightweight champion Leon `Iron Lion` Mynhardt. Undefeated in competition, and driven by a raw desire to survive, `The Answer` will stop at nothing when he faces the brute power, skill and experience of Pretoria`s favourite son, the `Iron Lion`.

Also, in the exciting women’s division, and all the way from Italy sees the former amateur world champion Micol Di Segni challenge South Africa’s Danella Eliasov. All this and so much more scheduled for Saturday 3 October at Carnival City, Johannesburg. Watch the countdown to this mega event here: https://youtu.be/LnCCWpgOb9k

But that`s not all! During an extended break between the EFC prelim bouts and the main 5 headline fights, fans can watch the rugby game between South Africa and Scotland at Carnival City`s purpose-built Rugby Fan Park.