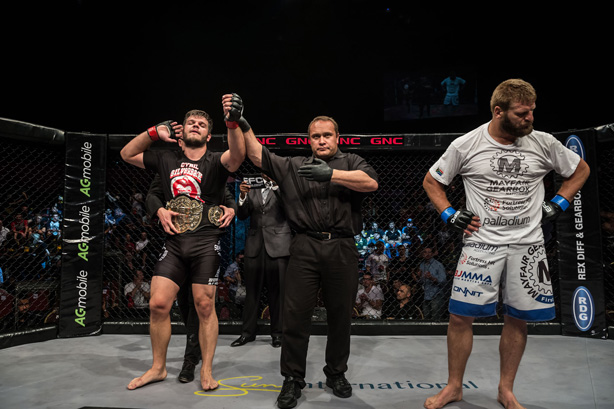 Johannesburg, South Africa – It was a night for the international contingent at EFC 44 at Carnival City, as Scotland’s Danny Henry and France’s Cyril Asker head north with their new EFC belts in tow. A stunned Carnival City bore witness to a historic night for the sport.

The main event was a short affair, after yet another incident of Andrew ‘One Gear’ van Zyl giving his neck away too easily saw him succumb to a guillotine choke from the Frenchman. What started as a timid affair, gathered pace midway through the first round and ultimately led to the two men struggling it out on the ground. The skirmish on the mat was soon over after van Zyl gave Asker to much room. Asker pulled guard with the guillotine firmly set and the defending champion had no option but to submit. Asker went on to declare he would be the “most dominant champion the EFC will ever see” in his post fight interview.

The main event was preceded by Leon Mynhardt’s successful defence of his lightweight belt against a resilient Themba Gorimbo. The challenger shot early in the first round, which led to several close but unsuccessful attempts at an ankle lock. Gorimbo took Mynhardt’s back late in the first, but the champion’s power allowed him to break his opponents grip relatively easily before the bell. The fight intensified in the second round as Gorimbo managed to land a vicious overhand right that rocked Mynhardt. Many felt his decision to shoot directly after landing the punch was the wrong one as the champ was clearly shaken. Mynhardt was presented with the opportunity to finish as Gorimbo left his neck exposed in the tussle. He duly capitalised to salvage South African pride on the night, much to the delight of the partisan crowd.

Boyd Allen’s loss to Danny Henry will surely go down as the fight of 2015 after the Scotsman took the seemingly unbeatable Allen into the championship rounds. After a first round that saw Allen pick apart the challenger with a barrage of strikes, the Scotsman composed himself to change the course of the fight. Henry directed the fight to the ground in rounds two and three where he was more than a match for Allen. A highly technical exchange between the two athletes had the crowd in raptures, but the intensity seemed to get the better of Allen as he visibly gassed as the fight went on. In round four, Henry again managed to get the better of his opponent on the mat and closed out the fight with a series of strikes that led to stoppage by referee Brad Bloch.

Allen was gracious in defeat after suffering his first loss in the organization. “He got the better of me and I gassed. I have no excuses. Credit to Danny and his team.”

Italy’s Micol De Segni completed the foreign invasion at EFC 44 with her unanimous victory over local favourite Danella Eliasov, showing tremendous technical ability in all facets of MMA. The fight opened with De Segni dominating the stand up exchanges in the first round, and then cruising through rounds two and three with some clinical wrestling.

The first fight on the main card was marred by what many feel a questionable judges decision, as Peter ‘Kratos’ Nyide lost to Oumpie ‘Lion Heart’ Sebeko by split decision. The three rounds were action packed with heavy hands and some devastating kicks from both competitors. Many felt that Nyide was the righteous victor despite the judges’ call. When questioned on his thoughts, EFC president Cairo Howarth confirmed that both athletes would be paid their win bonuses in lieu of their great performances.

‘Fight of the Night’ was awarded to the featherweight title clash between Boyd Allen and Danny Henry. Performance bonuses were awarded to Horatius Alonu, Oumpie Sebeko and Peter Nyide.