Three title fights on the line at Carnival City 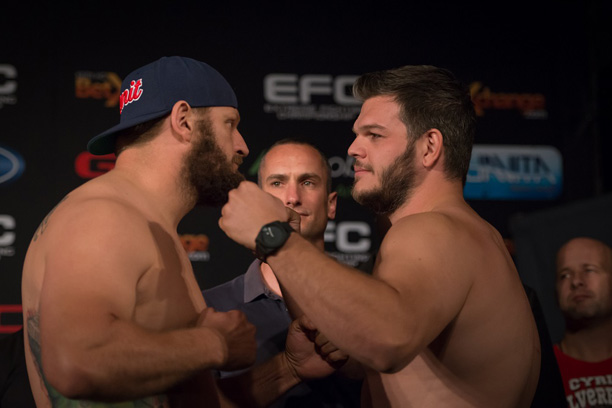 Headlining EFC 44 is the heavyweight championship bout between the dominant Andrew ‘One Gear’ van Zyl and France’s Cyril ‘Silverback’ Asker. The two behemoths of similar styles stood face-to-face for the last time before they finally meet inside the EFC Hexagon.

The champion, van Zyl, stated in his interview after getting off the weigh-in, “I’ve won and lost it and won it again. No one is going to take this belt from me.”

In the penultimate bout of the evening, lightweight champion Leon ‘Iron Lion’ Mynhardt took his time as if to taunt his Zimbabwean challenger Themba ‘The Answer’ Gorimbo who bounced around impatient while waiting to face-off. One the two stood eye-to-eye the intensity between the two became palpable, with cheers and boos echoing around the room.

Gorimbo stated in his interview, “I visualised this moment 4 years ago and tomorrow I take the belt!” Meanwhile, in stark contrast the relaxed champion Mynhardt simply thanked his fans, “Thanks to everyone for coming to support. I love you all.”

The first title fight on the night sees the exceptional featherweight champion and hometown hero Boyd Allen defend his belt against dangerous Scotsman Danny Henry in what is expected to be a technical war and Allen’s biggest threat yet. The two respectful athletes faced off, with loud cheering from the supportive local crowd.

The Scottish challenger Henry confidently stated, “I’m going home with that belt!” Unfased by the challenger’s statement, Allen simply stated, “We are going to put on a show for you guys.”

Also featuring on the main card, the darling of South African MMA Danella Eliasov faces Italian amateur world champion Micol Di Segni. A bout that fans have dubbed ‘The Psychiatrist vs. The Suicide Girl’ has been receiving massive media attention with the athlete’s contrasting lifestyles outside of the Hexagon. Fireworks are expected when these two ladies finally meet tomorrow night.

Rounding off the main card sees two fan favourites in what is expected to be a ‘Fight of the Night’ barn burner, when Oumpie ‘Lion Heart’ Sebeko faces Peter ‘Kratos’ Nyide. Sebeko walked on stage with a crown on his head as a statement of confidence ahead of the fight. Both men stood nose-to-nose with neither backing down or wanting to show any weakness.

Two athletes initially failed to make weight. Sage opted to receive a financial penalty while Djembo made weight within the allotted extra time.

The full EFC 44 weigh-in results were as follows: