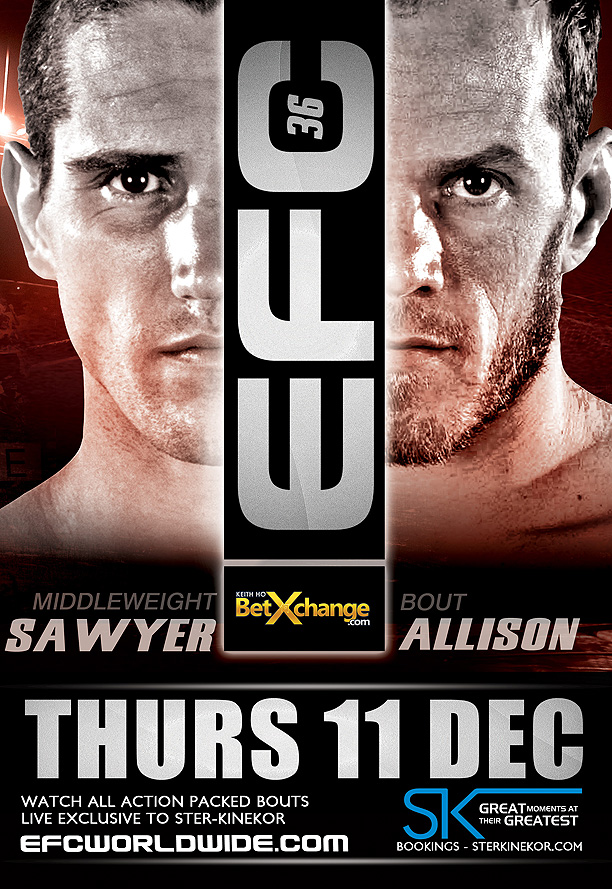 Johannesburg (South Africa) – On 11 December we see two of the best EFC middleweights go to war. This is a battle between natural athleticism and strength vs. slick technical submission skills. This is the main event of the EFC 36 Ster-Kinekor Prelims… This is Gareth Sawyer vs. Warren Allison.

The lesser experienced of the two, Gareth Sawyer is no slouch. Coming out of the same camp as the Buirski brothers and Gordon Roodman who are all known for their exceptional conditioning. Sawyer lives up to this reputation having displayed some behemoth strength. This is backed with a technical prowess as showed by winning his two bouts in the Hexagon via first round technical knockouts.

Now is his chance to move up the rankings into the upper echelons of the middleweight division, but standing in his way is the experienced submission expert Warren Allison.

In what started off weakly with back to back losses in EFC against middleweight champion Gareth McLellan and Juan Lubbe, Allison took a hiatus from the Hexagon. He returned at EFC 31 against Jason Culverwell to snap up a quick victory via an arm triangle in the first round. He then faced Cameron Meintjes in a three round clinch battle. Allison went on to seal the victory with a Kimura late into the third round.

These victories showed that Allison has improved vastly from his early EFC days and now is a threat to anyone that stands in front of him. A victory against Saywer for Allison will mean he can start making his run towards the EFC title.

In a must win battle for both athletes trying to build their names and careers, they are not going to leave anything in the Hexagon to the judges.

Watch this massive fight live ONLY at Ster-Kinekor cinemas. This plus 6 more explosive Ster-Kinekor Prelim Bouts, plus all the action from the 5 main card bouts in the larger than life MMA experience.

EFC 36: Allen, vs. Groth is presented by BetXchange.com, and takes place at the Coca-Cola Dome, Johannesburg, on Thursday 11 December 2014. Book your cinema ticket to all fights live and in state of the art digital projection at www.sterkinekor.com