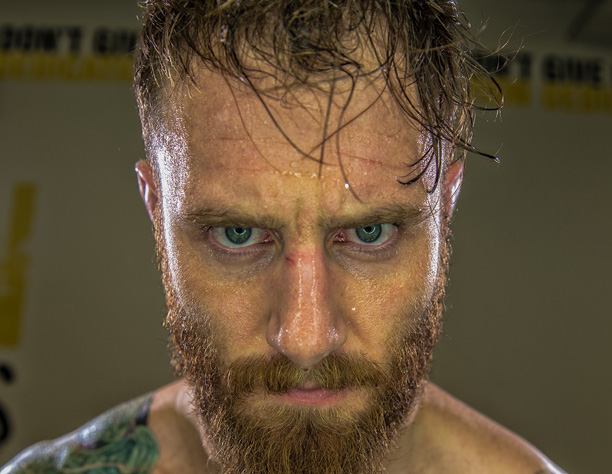 Johannesburg, South Africa – Yesterday morning, EFC matchmaker Graeme Cartmell visited one of the top gyms in Africa, Fight Fit Militia in Johannesburg, to see EFC 46 athletes Martin ‘The Punisher’ van Staden and Chad ‘Superman’ Hanekom in training ahead of their upcoming fights on 12 December. The visit was broadcast live on Periscope. Van Staden is schedule to challenge for the coveted EFC welterweight championship against champion David Buirski, meanwhile Hanekom is set to make his EFC debut against DRC’s Jean-Marie ‘Likofi’ Kabeya.

Included in the broadcast and training session with the upcoming competing athletes, Cartmell also got in a few questions with welterweight Mark Hulme and FFM head coach Richard Quan.

Highlights of what was said over the broadcast are as follows.

EFC Welterweight contender Martin van Staden:
“As much as he (David Buirski) needed the time for the fight, the extra time has done me well.” – On the fight being delayed from August

“I think that it will be a tougher fight now that he is there (CIT). But it isn’t going to make any difference.” – On Buirski’s move to Team CIT

“He is a part time fighter in an industry where you need to give it one hundred percent.” – On Buirski working full time

“I learnt a lesson when I faced Brian Ebersole. He schooled me and said it was because I was a weekend warrior and he was a full time fighter. The same thing is going to happen on 12 December”

“I’m here and I am going to become champion. No one is going to take that belt from me.” – On the welterweight curse

“I want to be king of the division.”

EFC Light heavyweight Chad Hanekom:
“The reason G-D made MMA, was so that rugby players could have role models too.”

FFM head coach Richard Quan:
“This fight is very dangerous, it’s a make or break fight. It makes David dangerous because he is putting everything into this.”

“With Martin we know one thing. He can take a punch and he can give a punch.”

“We call Martin ‘Wreck it Ralph’ in the gym, because of his massive hands.”

You can watch the full broadcast on Perscipe here: https://www.periscope.tv/w/1ypKdVrOEkLJW

Make sure to follow EFC on Periscope and never miss a second of all the exclusive footage: www.periscope.tv/efcworldwide

Join us at CIT, Pretoria this Saturday for open workouts and ticket giveaways.