A RING FIT FOR A ZULU KING 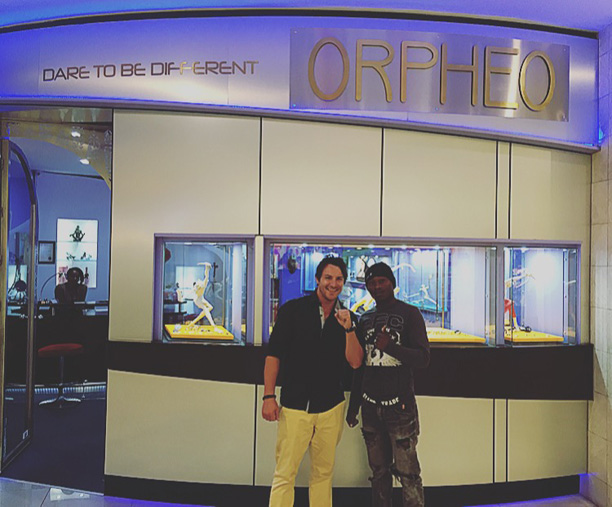 Johannesburg, South Africa – In 2015 Nkazimulo ‘Zulu Boy’ Zulu made history by becoming only the third athlete in EFC to be crowned champion in two different weight categories when he defeated Durban’s Craig ‘Nemo’ Ninow with a devastating first round knockout.

Zulu earned his first ring when he became the organisation’s first bantamweight champion and subsequently lost his title to the undefeated Demarte ‘The Wolf’ Pena. Having decided that he was small for the division, he opted to move down to the flyweight division, where he has had nothing but success.

This past weekend Zulu visited Orpheo Twins in Befordview to get the fitting for his second ring completed and will receive his second Championship ring in the next few weeks.

Valued at R35, 000, EFC’s elite fighters are awarded the rings as a prize they keep forever. Cignoli and chief designer Gilbert Torres have so far created opulent rings, for each champion. Each ring is hand-made from a combination of solid silver and 18 karat gold, with the title holder’s initials, weight division and date they won the title engraved on the inside. A diamond is added to each ring for every successful title defence.

Orpheo Twins Jewellers have been providing EFC champions with unique champion’s rings since the inception of the organisation. Former lightweight champion Wentzel Nel was the first ever to receive a ring, followed by the line of EFC champions that have come after. Orpheo work is uniquely distinctive, blending Latino-African passion with Swiss precision to create some of the world’s most sought-after jewellery.

Zulu is expected to defend his flyweight title against Angolan Marino ‘The Scorpion’ Cutendana for the first time in the first half of 2016.