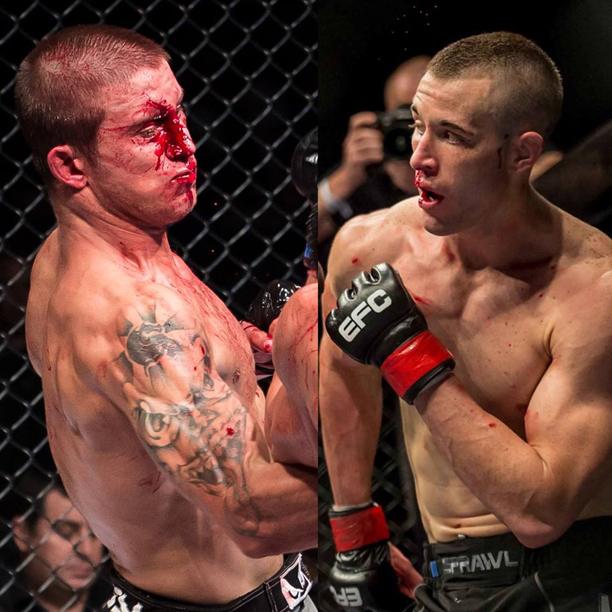 Johannesburg, South Africa – Last week, EFC HQ received word from lightweight contender American Dave ’The Pain Train’ Mazany that he had injured his elbow and in the process it had become infected. While Mazany took every effort to heal, it was decided that he would not be ready in time for as big a task as facing the dominant lightweight champion Leon ‘Iron Lion’ Mynhardt. With just over three weeks to go to the first event of the year, former featherweight champion Boyd Allen immediately stepped up and took the opportunity to face Mynhardt in an absolute dream match-up.

This is not the first time Allen has answered the call as a late replacement, ironically the first time was to replace Mynhardt against former lightweight champion Don Madge in Cape Town. That bout is remembered as one of the best stand-up technical wars in EFC history and was judged a split draw, proving how close and exhilarating the fight was. Mynhardt vs. Allen is sure to be nothing less than a reiteration of that memorable fight and so much more.

Pretoria’s Mynhardt has had incredible success in the Hexagon. Fighting out of Team CIT he has successfully defended his championship belt four times against the best the division has offered.

This bout will be a non-title fight and contested over three rounds at lightweight. The EFC featherweight title fight between Scotland’s Danny Henry and the undefeated Igeu ‘Smiley’ Kabesa will become the main event of EFC 47 on 5 March.

“It is always unfortunate when a contender withdrawals from a championship bout for any reason, especially when their health is involved,” stated EFC Matchmaker Graeme Cartmell. He continued, “We wish Dave a speedy recovery and to see him in action again soon.” Cartmell then added, “If EFC fans could put two of the biggest, most exciting fighters on our roster together they would probably choose Leon vs. Boyd. You know when walking into Carnival City to your seat, you are going to be anxious at the fact that Boyd and Leon have given fans mind-blowing performances at every single outing! In many ways, who wins is irrelevant because these are two of the biggest and most exciting names in MMA. You have to just sit back and hold on!”