Make sure you know the latest EFC 47 news 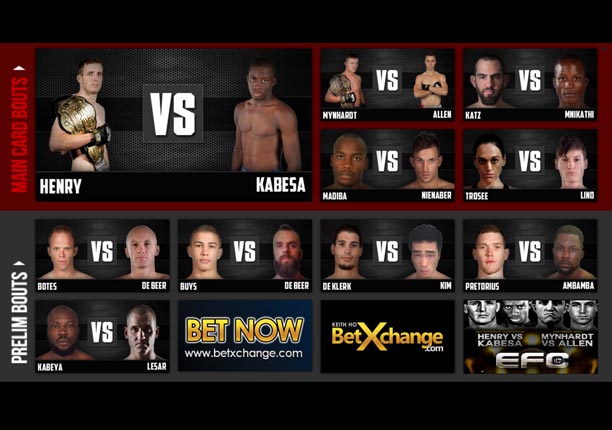 Johannesburg, South Africa – In every combat sport, athletes suffer injuries and sicknesses in the build up to their bouts. As a testament to EFC’s strict medical protocols, athletes are not allowed to compete should an injury or sickness hinder them from being able to perform at their highest abilities. Most notably, title challenger Dave ‘The Pain Train’ Mazany was forced to withdraw due to an infection and has been replaced by fan favourite Boyd Allen to face reigning lightweight champion Leon ‘Iron Lion’ Mynhardt on the upcoming EFC 47 main card.

Two athletes that were set to make their EFC debuts on the EFC 47 prelim card have also been forced to withdraw with varying medical reasons, Fighting Fit Africa’s Cassim ‘Phantom’ Khusu and Aly Kalambay.

Khusu was set to make his highly anticipated debut against FFM’s JP Buys. Fighting out of Potchestroom’s Close Combat Solutions, Roevan De Beer has since answered the late replacement call-up to take on the more experienced Buys in an exciting prelim bout.

Kalambay was scheduled to face the ever exciting Anicet Kanyeba, however, as their was no appropriate opponent to face Kanyeba this fight has been cancelled.

An exciting prelim card takes place ahead of the massive five fight main card in the first event of the year, headlined by Scotland’s Danny Henry vs. DRC’s Igeu Kabesa.