Pena declines to defend in Cape Town; Sayed fights Doyle for the championship 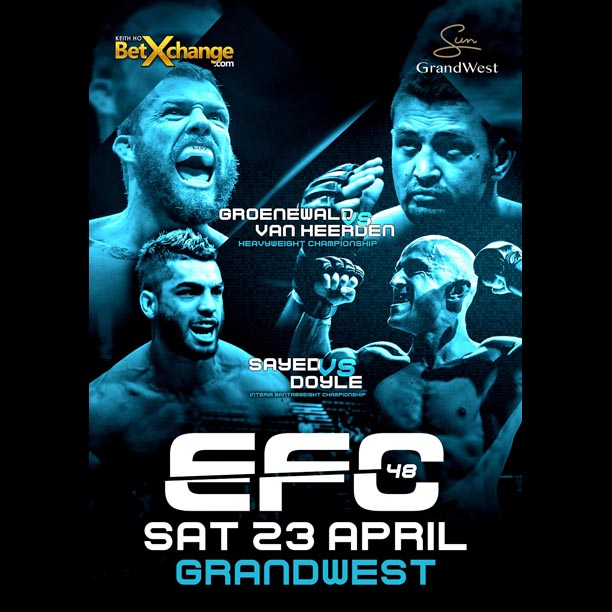 Cape Town, South Africa – EFC Cape Town just stepped up a level as it has been confirmed that due to the champion, Demarte Pena, refusing to defend his title, the number one contender Irshaad ‘White Tiger’ Sayed will face the former contender Cedric ‘The Dominator’ Doyle for the interim bantamweight championship.

The fight was initially announced on the weekend and it was not confirmed whether it would be a fight for the top spot or not, however today EFC President Cairo Howarth has made it clear that due to the uncertainty of when Pena will defend and because Sayed and Doyle are the top ranked competing athletes in the division, the highly talked about and contentious upcoming encounter will be for the EFC interim bantamweight championship.

The reigning champion Demarte ‘The Wolf’ Pena has on several occasions declined to defend his belt in Cape Town against the number one contender Sayed, citing he would only face him in his home country of Angola. It was then that Sayed and Doyle were matched to meet in Cape Town on 23 April on the EFC 48 card.

“Although we couldn’t get Pena to commit, we are really looking forward to this fight and are proud and happy for all the competitors and fans that it is now for the interim title,” stated EFC President Cairo Howarth. He continued, “Irshaad and Cedric are without a doubt the best two competing athletes in the division and if the champ is not willing to defend then we have no option but to let them fight for EFC gold.”

Sayed is the former RUFF China champion as well as a Muay Thai world champion, and has remained undefeated since his debut in EFC, having defeated many of the biggest names the division has to offer, only Pena and Doyle have eluded him so far. Doyle is a former title challenger, and is considered to have given Pena his toughest fight to date. He brings an unorthodox striking style and carries massive power, while still being significantly dangerous on the ground.

This massive match-up takes place as the co-main event along with Brendon Groenewald vs. Danie van Heerden for the vacant heavyweight championship.