Bumper card set to kick off the year for EFC 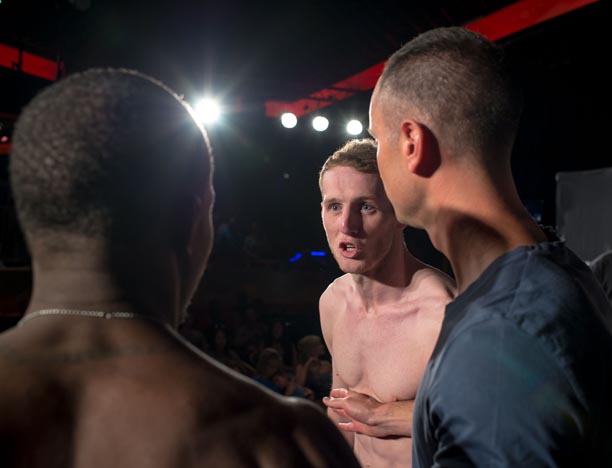 Johannesburg, South Africa – The official weigh-in for EFC 47, the first event of 2016, took place in Sports Bar at Carnival City on Friday Afternoon in front of a partisan crowd. After a three-month break, EFC is back and the the weigh-in left those in attendance sure that tomorrow’s main event will be full of action.

The event is headlined by the featherweight title fight between the champion, Scotland’s Danny Henry in his first title defence and the undefeated DRC born challenger, Igeu ‘Smiley’ Kabesa. Fans’ interests were peaked when the two athletes faced-off for the final time before they finally meet inside the EFC Hexagon on Saturday night.

Both men showed incredible confidence in their interviews. The challenger Kabesa promised fireworks. Ignoring the threats directed at him, Henry stated in his interview, “You will see the best version of Danny Henry you have ever seen tomorrow night!”. One question now remains. Can Henry make his first title defence and cement his position on top of the division? A formidable opponent awaits him.

In the co-headlining bout, lightweight champion Leon ‘Iron Lion’ Mynhardt takes on former champion Boyd Allen in the ultimate dream match-up. After the withdrawal of number one contender Dave ‘The Pain Train’ Mazany, Allen stepped in as a late replacement to make every EFC fans dream come true. Both men have been respectful and excited at the challenge that stands in front of them.

A highly anticipated featherweight match-up takes place between Johannesburg fan favourite Brendon Katz and Durban’s seemingly unstoppable Sizwe Mnikathi. Both men are well known for their aggressive, heavy-hitting styles and had lots to say to each other when they faced-off for the first time. Katz taunted his opponent, who came in overweight.

Also featuring on the main card, seasoned athletes Barend ‘BB Gun’ Nienaber and Tumisang ‘The President’ Madiba will collide in a great stylistic match up. Nienaber looked in great condition stepping onto the scales, and Madiba was his usual charismatic self.

Opening the main card will see the first ever all local female bout. Pretoria’s ‘Demolition’ Jacqui Trosee faces Durban’s Amanda ‘Mad Dog’ Lino in the opening bout on the main card. Both athletes seemed calm ahead of what is sure to open the main card in some style.

The full EFC 47 weigh-in results were as follows: