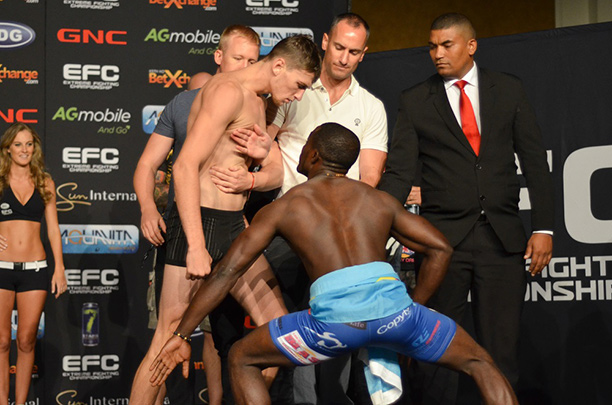 The event is headlined by the heavyweight title bout between former champion Brendon Groenewald and one of the most experienced athletes on the EFC roster, Danie ‘The Pitbull’ van Heerden.

Both giants were their casual selves when hitting the scale, but a mood of menacing quiet settled on the crowd when each fixed the other with a dead stare.

“This is a Danie like you’ve never seen before,” said Van Heerden. “I hope he’s ready.”
Groenewald responded with a wry smile, referencing the social media war that has been raging between them. “Danie’s said a lot, it’s time for him to prove it.”

The Mother City cheered their prodigal son as Sayed hit the stage, and he roared his appreciation back at them while standing on the scale. Doyle failed to make weight initially and was forced to drop his drawers, an unexpected highlight that drew further cheers.

“I am coming to finish the fight,” said Sayed. “I’m coming to make a big statement.”

“I know all South Africans want to keep the belt in SA,” responded Doyle. “I’m keeping the belt here.” Although born in and raised in Cape Town, Sayed now lives in New Zealand.

A highly anticipated lightweight match-up takes place between Cape Town favourite Don ‘Magic Man’ Madge and Durban’s Tyson Chelin. Madge was full of the fire that took him to the lightweight championship at EFC 20, while Chelin laughed his opponent’s challenge off with typical nonchalance.

Bookmakers Betxchange.com have all three home town heroes – Groenewald, Sayed and Madge – down as favourites to win tomorrow night.

Also featuring on the main card, the controversial Mark Hulme takes on the DRC’s undefeated Kaleka ‘Block’ Kabanda. Both men are highly aggressive, setting up a cracking clash.

All athletes made weight bar Cedric Doyle, who successfully cut down to his required 61kg inside the required two hours.

The full EFC 48 weigh-in results were as follows: