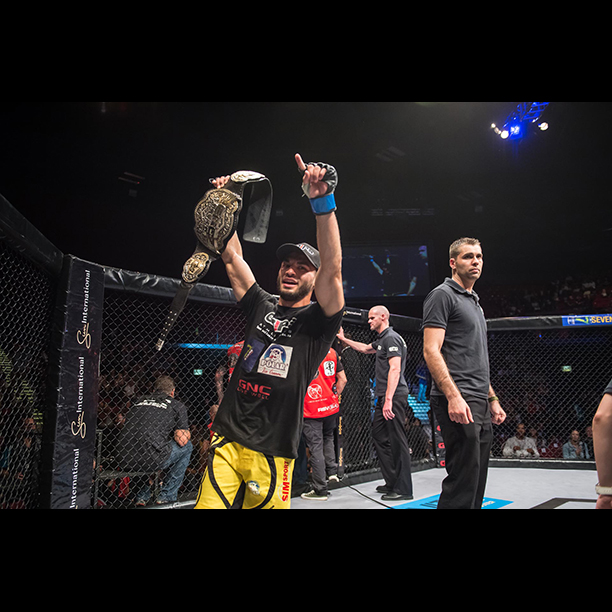 Johannesburg, South Africa – A rain swept night was the perfect backdrop to 11 bruising MMA bouts at the GrandWest Grand Arena this Friday. Anchored by two title fights in the bantamweight and heavyweight divisions, EFC 48 delivered a string of knockouts. Irshaad ‘White Tiger’ Sayed laid claim to the interim bantamweight title, and Danie van Heerden took possession of the heavyweight crown.

The heavyweight showdown was marked by bad blood to begin with. Cape Town’s Brendon Groenewald and Johannesburg’s Van Heerden had baited each other remorselessly in the buildup. Groenewald attempted a ground assault in the second, a choice that backfired when Van Heerden took mount and delivered brutal ground and pound, leaving Groenewald in a bloody mess and the loser by TKO.

In the co-main event Johannesburg’s Cedric Doyle came out firing against the former Muay Thai world champion Sayed, landing multiple strikes in a hair raising display of back and forth standing combat. Constant pressure gave him a clean rear naked choke opportunity, which Sayed almost impossibly rode out and finally escaped from.

Having absorbed the best of Doyle’s arsenal, the experienced Sayed began to pick Doyle off with accurate strikes in the second, finally finishing him in the third with a standing knee leading to a referee stoppage. The bout was rightly named the ‘fight of the night’ and is surely the first of the ‘fight of 2016’ contenders.

Now owning the interim title, Sayed wasted no time in calling out inactive champion Demarte ‘The Wolf’ Pena. Pena’s refusal to face Sayed has caused controversy. A message from him of ‘anytime, anywhere’ had EFC president Cairo Howarth assuring fans of a bout between the two in the near future, potentially setting up a Mother City showdown.

Former lightweight champion Don ‘The Magic Man’ Madge returned to competition in a blaze of fury. Entering the Hexagon with a mass of aggresion he shattered opponent Tyson Chelin with brutal body kicks in the first round. Madge’s switch to Johannesburg’s Fight Fit Militia gym has clearly paid off, and his intent to retake the title is obvious.

Madge’s FFM teammate Mark Hulme brought a similar level of focused skill in his bout with the DRC’s Kaleka Kabanda. Kabanda entered the fight riding an undefeated three fight streak, but was soon outclassed by Hulme’s all round, constantly evolving game. Afterward Hulme called for any opponent that the organisation would offer. In the deep waters of the welterweight division he is looking more and more dangerous.

The EFC 48 main card got underway with Hanru Botha vs Sibusiso Mdoku. Botha, a decorated wrestler, scored the quickest finish of the night when a blaze of fists left Mdoku out cold after only 19 seconds. Botha is currently in training to qualify for the Rio Olympics as a wrester in 20–, and with another unforgettable knockout under his belt is a force to be reckoned with in the featherweight division.

‘Fight of the Night’ was awarded to the bantamweight bout between Irshaad Sayed and Cedric Doyle. Performance bonuses were awarded to Mamadou Toure and Hanru Botha.