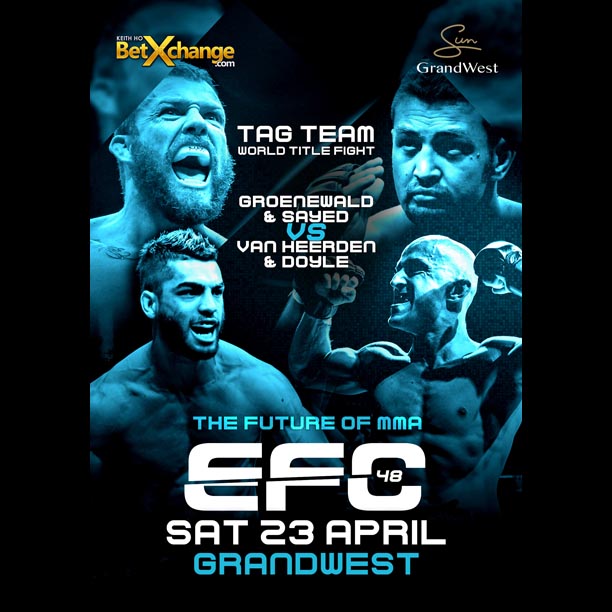 Cape Town, South Africa – In a bid to continue growing the sport of Mixed Martial Arts (MMA), EFC is introducing a new rule set in MMA and has changed the upcoming double title fight event to a WWE style tag team matchup.

The event was initially scheduled for Cape Town on 23 April, which was featuring Brendon Groenewald vs. Danie van Heerden for the vacant heavyweight title and Irshaad Sayed vs. Cedric Doyle for the interim bantamweight title, but this morning it was announced that a revolutionary plan in MMA promoting would be put in place.

“We are incredibly excited to see our first tag team fight go down and it promises to deliver big action. I am especially looking forward to seeing Sayed stand toe-to-toe with the boxing of van Heerden, I really think that the bantamweight, Singapore slinger will have the power and KO advantage over the heavy, Joburg joller.”

Howarth explains this remarkable new format here: “We have decided to combine the two fights into one massive fight with all four of the athletes. Now Brendon Groenewald and Irshaad Sayed will team up and take on Danie van Heerden and Cedric Doyle.” Howarth added: “Obviously the more big-names we can get in a fight means the fight will be bigger. Since we will be combining more fights, we will be able to fit more athletes on a card and hopefully one day in the future we will see a rumble style fight with thirty of our top athletes.” In addition to the standard MMA rule set employed by EFC, further specific tag team rules will be as follows:

As the ultimate authority over the bout, a referee may overlook any of these at his discretion, and during frenzied action, often will be more lenient with them.

When asked for comment on the new title fight Cedric Doyle had the following to say, “Man, this is exactly what I have been waiting for. This is the real money fight. Now I can show I am better than everyone in EFC including the heavyweights, just hope Danie doesn’t let me down.”

“We were planning on having the first tag-team bout take place at EFC 50, but now we have something even bigger in the works for the milestone 50th event,” stated Howarth. He concluded, “We are confident the association will provide the sanctioning necessary to have the first male vs female fight take place for the 50th event. This could possibly be the most ridiculous event the MMA world has ever seen!”