Meet the men making their debut at Carnival City 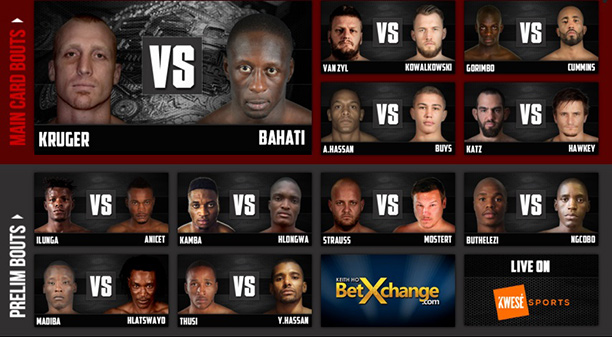 Johannesburg, South Africa – It is just over a week to go until a new middleweight champion is crowned between South Africa’s JP ‘Tinkerbell’ Kruger and England’s Yannick ‘Black Mamba’ Bahati. While the title fight is getting most of the media attention, there are some new faces on the upcoming card looking to build their own legacies’. These athletes are full of talent, but making their mark will not be an easy task as they face some of the best and experienced the EFC roster has to offer. These bouts take place on the prelim card and are exclusively live Carnival City.

Bill Thusi vs Yussuf Hassan – Bantamweight
Hassan is the younger brother of bantamweight contender Abdul Hassan and is undefeated as an amateur in his home town of Durban. He faces a tough task in the opening fight of the prelim card next Friday in four fight EFC veteran Bill Thusi. Hassan is giving up a major height advantage to the experienced kickboxing of Thusi, but being from the Hassan family, he is likely to have the advantage on the ground.

Mthobisi Buthelezi vs Sfiso Ngcobo – Lightweight
Sfiso Ngcobo brings some devastating power, having finished all his amateur opponents via TKO, however, on 13 May when he makes his EFC debut, he faces a new level of opponent. The former SA K1 champion, Mthobisi ‘Grim Reaper’ Buthelezi is waiting for him.

Wilhelm Strauss vs Wessel Mostert – Heavyweight
Wessel Mostert, AKA: ‘The Wes Express’ could possibly be the biggest heavyweight in EFC and he is fighting the only remaining former super heavyweight in the organisation. A training partner and mentee to recently crowned heavyweight champion Danie van Heerden, Mostert brings a wealth of experience which is seldom seen from amateurs who turn professional in the heavyweight division. He notably won the IMMAF world championship in 2014, the same year as Durban’s Amanda Lino. It is a giant vs. a titan when Mostert takes-on Wihelm ‘Tiny’ Strauss.

Mark Kamba vs Mzwandile Hlongwa – Middleweight
Having already beaten some EFC athletes as amateurs, South African Mzwandile Hlongwa is a big man with heavy-hands. He faces DRC born Mark Kamba, who is coming off a devastating TKO finish in Cape Town at EFC 48 last month.

These bouts and more take place on the prelim card and are exclusively available live at Carnival City and take place ahead of the massive five fight main card, headlined by the vacant middleweight title fight between South Africa’s JP Kruger and England’s Yannick Bahati.