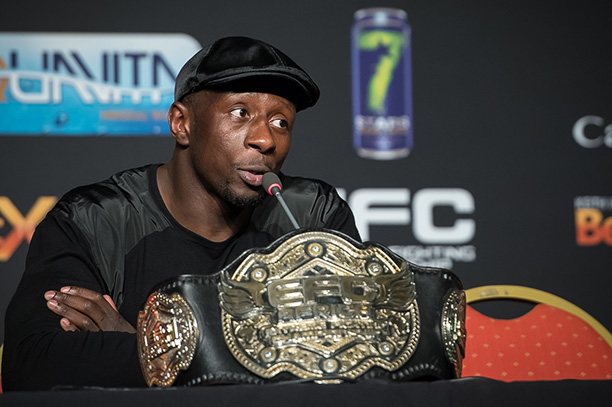 Johannesburg, South Africa – After the epic EFC 49 event, two official post-event press conferences were held in the Mardi Gras Theatre at Carnival City where athletes and EFC President Cairo Howarth answered questions from media. The press conferences were filled to capacity and fans were witness to some massive fight announcements, fighters calling each other out and face-offs.

Following are some highlights from the live broadcast.

Bahati explained his previous comments on Kruger’s BJJ level, and reiterated that if he had to fight the former EFC champion Garreth ‘Soldierboy’ McLellan, he would be the victor. He is adamant that he is the best middleweight EFC has ever seen.

Joe Cummins and Themba Gorimbo went back and forth over the result of their bout, with a clearly frustrated Cummins stating: “I don’t feel like I have been in a fight, I’ve had more injuries from gardening.”

As Katz expressed his interest in dropping down a weight division, a possible match-up between Abdul Hassan and Brendon Katz was discussed in a rather comical manner.

After coming off a devastating loss to South Africa’s Andrew van Zyl, Poland’s Tomasz Kowalkowski answered a tough question relating to his future as a heavyweight and JP Buys who was victorious over Abdul Hassan faced the same question about his future weight preference.

This and much more went down at the EFC 49 press conference.

Following, the EFC 50 and EFC 53 events were put straight into the spotlight.

David Buirski and Dricus du Plessis made their way onto one side of the stage and Martin van Staden joined Yannick Bahati on the other.

Along with the du Plessis vs. van Staden welterweight title fight, Cairo Howarth announced the rest of the maincard line-up for the upcoming EFC 50 event, a historic landmark occasion taking place at Sun City.

It was also confirmed by Howarth that David Buirski, after having vacated the welterweight title, would be facing the newly crowned middleweight champion Yannick ‘Black Mamba’ Bahati at EFC 53. The event is set to take place at Carnival City.

Besides answering questions from the media relating to their opponents, the athlete’s faced off for the first time.

Both press conferences, which were broadcast live, are available to view now on www.kwesenow.com/efc/. They can be viewed along with all the bouts from Friday’s exciting event, including, all the prelim bouts which were not broadcast live. Check it out now!