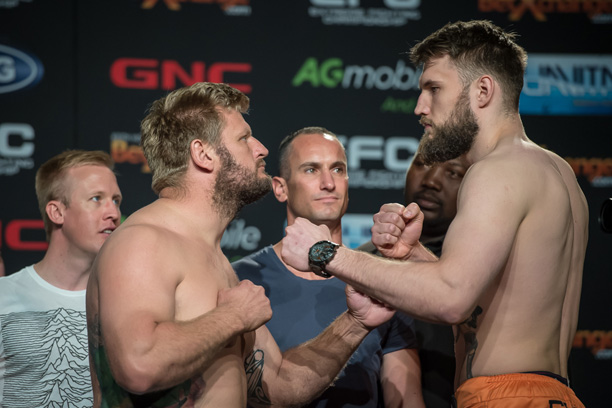 Johannesburg, South Africa – eNCA’s Simon Stephens takes a deeper look at tonight’s main card fights. Below is a short excerpt from the article, which can be read in full here: efcww.com/24PAL3P

“Fast on the heels of last month’s storm of savagery in Cape Town, the Extreme Fighting Championship returns to Johannesburg for what promises to be a great evening of combat, particularly a main card that contains several slobberknockers of note.”

“Reports from his training camp are suggesting that this is the best Andrew van Zyl yet, he is apparently in great shape and recently returned from Conor McGregors SBG base in Dublin under the watchful eye of head coach John Kavanagh. Sounds like One Gear just got a new split diff. Kowalkowski however is a bit of a conundrum resembling the Baltic cranes of Gdynia where he was born. At 2.1 metres in height he has a 7cm reach advantage with which to jab anyones face into the next postcode, if Van Zyl is able to get past that guard and sweep to mat, he needs to control four lanky limbs to work his groundgame. Not easy. But I must say that I wasn’t impressed with Tomasz’s loss to Brendon Groenewald his last time on these shores, once in the Capetonians full guard he slipped his arm out of the triangle only to inexplicably put it back in again. Van Zyl would lurve a gift-wrapped prezzie like that. Furthermore, we really haven’t seen the Pole-Pole exchange a great deal in the stand-up which would also be interesting pitted against the granite chin and swinging meathooks of the Parktown Boys High hero. Not going the distance this one.”